Casey Stoner gets to grips with Honda

Casey Stoner gets to grips with Honda 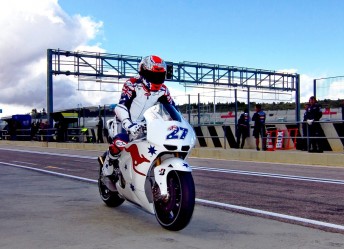 Casey Stoner has set the second quickest time of the opening day of testing for Honda at Valencia in Spain.

All MotoGP 2011 line-ups were present at the test including Valentino Rossi with Stoner’s now former employer Ducati.

44 laps on the RC212V left the Australian extremely happy with how his first ride went.

It’s the first time since 2006 that the Australian has ridden a Honda and the first time working with headline Repsol factory team. He was only beaten on the day by 2010 World Champion Jorge Lorenzo on a Yamaha by 0.753 of second.

“I had a very good day,” said Stoner.

“I was disappointed that we couldn’t get a full session in this morning because of the weather, but it dried out and gave us some hours of good track time this afternoon.

“It’s been very exciting these past few days waiting to get on the bike, and then having to wait again this morning. It’s been a great experience to get back on a Honda, the way it feels is fantastic.”

Stoner tested the 2011 chassis against the frame ridden by new team-mate Dani Pedrosa in the 2010 campaign, and gained a positive feeling.

“We’ve been working on a few different things but mainly just trying to get a bit of a better feel, and things like my seating position and brake levers,” said Stoner.

“We’re trying to understand the electronics system and what sort of direction we want to go in, and at the same time trying to get comfortable with the bike. There’s no point giving a lot of data at the moment but at the same time we have to try and push on because there’s not a lot of test time before the start of the season. We need to get as much information as possible before the winter break.” 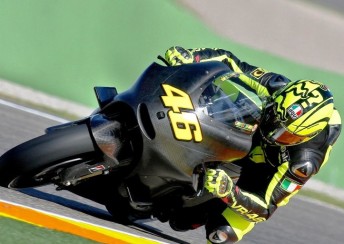 Valentino Rossi was positive on his first outing on a Ducati

Under the guidance of General Director Filippo Preziosi and Australian race engineer Jeremy Burgess, Rossi rode the majority of his first day aboard the Desmosedici GP11 with a ‘big bang’ version of the engine. The Italian worked on geometry and other settings and only at the end of the day did he make a run using the ‘screamer’ version of the engine.

“The main thing that hit me today was Vale’s positive feedback and his capacity for analysis,” said Preziosi.

“Today he tested the GP11 with the ‘big bang’ engine on a standard setting, which he modified step by step to adapt it to his riding style. His first comment when he lifted his visor up was a positive one about the power delivery and then he gave some impressive technical details.

“At the end of the session he went out on the screamer version but we will make more of an analysis between the two engines tomorrow because they deliver the power in very different ways – the big bang has a more regular power curve whereas the screamer is more aggressive but also more powerful.”