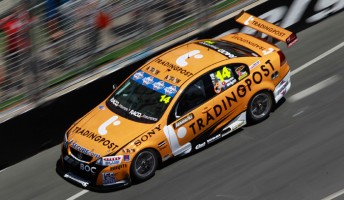 Trading Post has confirmed that it will move to Ford Performance Racing as the naming-rights sponsor of the factory Ford squad’s #6 Falcon in 2011.

The Telstra-owned brand confirmed last month that it was ending its current sponsorship agreement with Brad Jones Racing after just one season.

The move to FPR will see Trading Post back the car touted as the future home of 2009 championship runner-up Will Davison, who is expected to leave the Holden Racing Team at the end of this season to replace Steven Richards in FPR’s #6 entry.

“Our association with FPR and the V8 series is a great fit with our customer base and Trading Post customers can look forward seeing their car burn up the track with FPR next year,” said Head of Telstra Classifieds, Michael Padden.

Telstra is also involved in V8 Supercars through its internet brand Bigpond, which is one of two platinum sponsors of the series along with XXXX Gold.