Murphy and Castrol leave PMM at end of year

Murphy and Castrol leave PMM at end of year 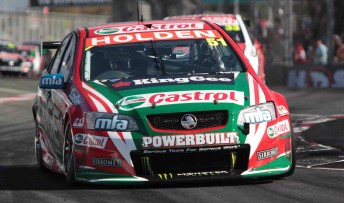 Greg Murphy and Castrol will not be at Paul Morris Motorsports next season.

After a frustrating year that has yielded just one top 10 result, the popular Kiwi will leave the team at the conclusion of the 2010 V8 Supercars season, ending his most disappointing season on record.

His struggles on the track has caused a stir amongst a busy silly season, with TeamVodafone endurance driver Steve Owen one of a number of drivers linked to the second PMM seat next year alongside Russell Ingall.

Murphy, a four-time Bathurst winner, says that he wants to remain in the series, preferably as a full-time driver.

“I am not retiring, and while my immediate focus is very much on finishing the season strongly and doing the best for Castrol and PMM, I am hopeful that making this announcement will open up other opportunities for me to continue racing V8 Supercars,” Murphy said.

“When [team owner] Paul Morris, Castrol and I announced our partnership at the end of last year we all had great expectations, but for whatever reason things just have not worked out as planned.

“It certainly has not been for a lack of effort, and for that I can’t thank the PMM team enough.”

Murphy leaving PMM also coincides with Castrol announcing today that it will not renew its naming-rights sponsorship of the team next year.

Castrol Marketing Director Andrew Johnson said that Castrol will remain with the team, but only in a minor role.

“V8 Supercars is an incredibly competitive game; it’s only fractions of a second that separate first to 15th,” he said.

“That’s what makes it so exciting for the fans and we will always be part of that action.

“Our decision to reduce investment with PMM is purely to allow us to take greater control of the performance message of our premium brand, Castrol EDGE. Our future approach will be to clearly demonstrate the performance superiority of EDGE for all car enthusiasts.

“It was not an easy decision as the entire team, especially Greg Murphy, have been extremely easy to work with and generous with their time with our customers.”