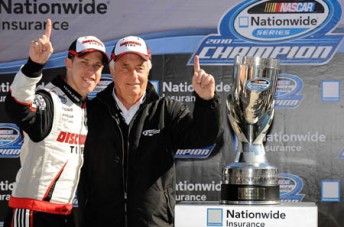 Brad Keselowski has delivered team boss Roger Penske one of the few crowns in US motorsports that he does not already hold – a NASCAR championship.

In his first season at Penske Racing, Keselowski sealed the Nationwide Series title with two races still remaining with third place at Texas Motor Speedway over the weekend.

Keselowski was pleased to deliver The Captain and his entire organisation their first NASCAR crown after decades of success in IndyCar, sportscar and even Formula One competition.

“I’m so very fortunate and blessed to have this opportunity with (crew chief) Paul Wolfe and Roger and everybody back at the shop,” said Keselowski.

“The guys that are there miss their kids’ Little League games working hard on my car.

“We almost had a win here today. I wanted to win this one, too, but it didn’t work out.”

The Nationwide Series is likely to take on a completely new complexion in 2011, with NASCAR poised to change the rules for its second-tier series to deny full-time Sprint Cup drivers the chance to run for the Driver’s Title.

The last five Nationwide (formerly Busch Series) crowns have gone to full-time Sprint Cup drivers on ‘double duty’, with Martin Truex Jr the last Nationwide-only driver to take the title back in 2005. 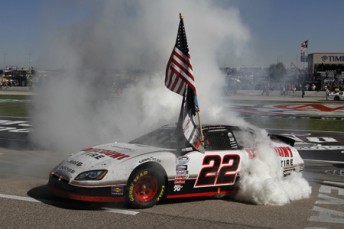 With the anticipated rule change several teams have moved quickly to sign Cup-calibre pilots to full-time roles for the 2011 Nationwide Series.

Elliott Sadler, out of a drive at Richard Petty Motorsports at the end of this season, will drive for Kevin Harvick Incorporated in the Nationwide Series in 2011 with sponsorship from Citi Financial.

“We’re committing to race for the Nationwide Championship in 2011,” said Sadler.

“That’s a very achievable goal and one that I’m very hungry for.”

Another driver and team combination capable of taking out the Nationwide title is Aric Almirola and JR Motorsports, with this season’s Sprint Cup ‘super sub’ signed to drive the Hendrick Motorsport-prepared #88 Chevrolet next season.

“The chance to drive full time in the Nationwide Series with a top caliber team is something I am extremely excited about,” said Almirola, whose latest stand-in role is as Kasey Kahne’s replacement in the #9 Budweiser Ford at RPM.

With Penske’s NASCAR squad losing major backers Mobil 1 and Verizon at the end of this season the organisation is set for a significant shake-up.

Penske is likely to field just two Sprint Cup entries in 2011, with Kurt Busch taking on the #22 Shell/Pennzoil Dodge as Keselowski takes over the #2 Miller Dodge. 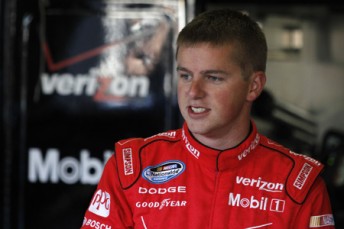 Rated as a star of the future, Justin Allgaier will leave Penske Racing at the end of the year to race for Turner Motorsports in 2011

Penske could run a second Nationwide Series entry to be shared between Keselowski, Busch and development driver Parker Kligerman, who could also get seat time in the Keselowski family’s Truck Series team.

All those moves have forced Penske to release young gun Justin Allgaier, a race winner in Penske’s Verizon-backed Nationwide Series car this season and the highest-placed non-Sprint Cup driver in this year’s championship. The former ARCA champion sits in fourth place in points with two races remaining, behind Keselowski, Carl Edwards and Kyle Busch.

With Verizon moving its sponsorship out of NASCAR at the end of this year, likely moving to Penske’s IndyCar squad, Allgaier has been snapped up by Turner Motorsports, the team formerly known as front-running Nationwide Series team Braun Racing.

With the Turner organisation’s take-over of Braun, Allgaier will race full-time in a Chevrolet in next year’s Nationwide Series with an eclectic combination of Hendrick Motorsport engines, Kevin Harvick Inc. bodies and Dale Earnhardt Inc. drivetrains.

Many experts have questioned Penske’s loyalty to Hornish, who has struggled at Sprint Cup level, with his retention of the former IndyCar champ forcing rising star Allgaier to leave the team to secure a full-time drive.