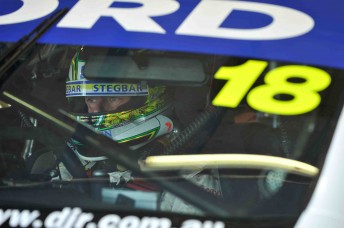 James Courtney is one of Ford's favourite sons

Ford Motorsport boss Chris Styring has vowed to fight to retain the services of V8 Supercar series leader James Courtney for next season.

Styring’s admission comes as speculation over Courtney’s racing future hits overdrive ahead of the Falken Tasmania Challenge at Symmons Plains Raceway this weekend.

Styring told News Limited newspapers today that Ford would work hard at keeping Courtney as a Ford driver for 2011.

But an ownership dispute between Johnson and Schwerkolt, and subsequent failed buyout of Schwerkolt’s share in the team by mining magnate Nathan Tinkler, sees Courtney’s future at the Dick Johnson Racing operation up in the air.

Reports have linked Courtney to several seats for 2011, including the #22 Commodore at the Holden Racing Team. Will Davison is expected to leave HRT at the end of this season as the 2009 series runner-up joins Ford Performance Racing in a Trading Post-backed Falcon.

Styring wants to keep Courtney in a Falcon next season, should he leave Dick Johnson Racing.

“We are aware Holden are trying to sign him,” Styring told News Limited journalist James Phelps.

“And why wouldn’t they? He is a star.

“We know he met them in Melbourne last week and we are doing everything to keep him somewhere in the Ford stable.

“But we have a battle on our hands. We can’t pay drivers a wage directly. But we are looking at several options to keep him with a Ford team.”

The speculation over Courtney’s future beyond this season has prompted his UK-based manager Alan Gow to issue a statement denying any deal for 2011 was done.

Gow, who last week was elected as President of the FIA Touring Car Commission, said that Courtney remained contracted to DJR for next season.

However, Speedcafe.com.au understands that should Schwerkolt sell his stake in the operation, the change in the ownership status of the team would render Courtney a free agent.

“Whilst it’s very flattering that the media are speculating so much over James’ future, I can categorically state that he/we have not signed any contract or agreement for James to drive for any other team or manufacturer next year: None. Zip. Nil. Zero,” said Gow in a statement today.

“Let me be very clear on this; James is contracted to Dick Johnson Racing and that is the only contract or agreement in existence for him to drive in the V8 Supercar Championship. I really can’t put it any more plain than that.”

Gow said that Courtney’s energies were completely focused on racing, where he holds a 71-point lead over defending V8 champ Jamie Whincup.

“James remains 100 percent focused on winning this year’s championship, and delivering more race wins for both his team and Ford fans who have supported him for many years,” said Gow.