Following his heavy crash at the first chicane in Sunday’s race at the Armor All Gold Coast 600, Walkinshaw Racing has elected to build a new chassis for Tander rather than repair the extensive damage to the West Aussie’s current car.

Tander told Network Ten reporter Tim Hodges that his crash at the Surfers Paradise street circuit was so bad that it was quicker and easier for the team to build up a new chassis for Tasmania.

“It would have taken longer to repair the car than it would take to build a new one,” Tander told Ten News.

“This chassis is just a replica of that, it’s one we just had laying around.

“My old car … will get fixed and ready for the end of the year and I will stay in this one, chassis 14, for the forseeable future.” 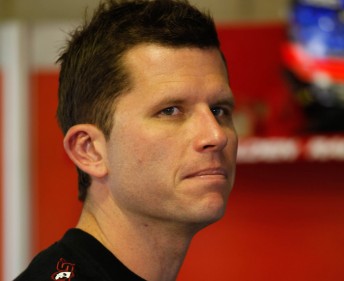 Tander had a 20-lap shakedown of his new car last Friday at Winton, before it was loaded into the team’s transporter to travel down to Tasmania.

It will be the third chassis for Tander this season, after he and Toll HRT team-mate Will Davison both debuted brand new Commodores at the Skycity Triple Crown in Darwin in June.

“A lot of the running gear from my car previous has gone into this car, a lot of the bits are the same, and the actual chassis that it’s all bolted to is the same spec, so we have no fears that it won’t be fast out of the blocks,” said Tander.

The build up of this new chassis, WR014, caps a month of long hours for the staff at Walkinshaw Racing, following massive shunts for Fabian Coulthard’s #24 Bundy Red Commodore and Will Davison’s #22 Toll HRT car at Bathurst.

For the Gold Coast event, Coutlhard reverted to the Bundy Red car raced in the Fujitsu Series by David Reynolds at Townsville and Nick Percat at Bathurst, the same car that Coulthard used in the first part of this season. 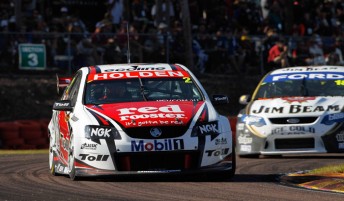 Will Davison, meanwhile, switched back to the car he started the 2010 season in for the Gold Coast event following his late-race smash at Reid Park.

“It’s not great, I don’t know what the number is, and to be honest, I don’t think I want to know,” said Tander.

Tander also weighed into the debate over the future of current V8 series leader James Courtney, admitting that the Toll Holden Racing Team was in talks with potential drivers for the team’s #22 Commodore, with the impending departure of his current team-mate Will Davison.

“Certainly I know the team are in talks with many people, not just James,” Tander told Ten News.

“Whoever ends up being my new team mate I look forward to working with them.”

Alex Davison will also debut a new chassis in Tasmania – CLICK HERE for our previous story on his new IRWIN Falcon.

See below the Ten News package on Tander’s new car – the story will re-air nationally on Sports Tonight at 9:30pm on ONE HD.