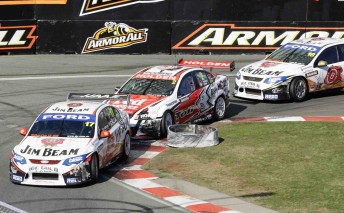 The Toll HRT Commodore surrounded by the Jim Beam Falcons

Crick, currently competing in the Australian GT Championship, will replace Mezera who will miss the round due to pre-arranged personal commitment.

Mezera will be back in his usual role as DSO for the final two rounds of the V8 Supercars Championship Series at Sandown and Sydney.

Crick sat in with the stewards at the recent Gold Coast 600 to soak in as much information as he can so he is best prepared for this weekend.

The Tasmanian said that it was a massive eye opener to see how the team of stewards work.

“I was up at the Gold Coast to see how it all unfolded to prepare for this and to honest, it was very enlightening,” Crick told Speedcafe.com.au.

“It’s very interesting how it operates. I think it would be a major insight if people could see what happens in race control during a race.

“But I’m just there to fill in and my role is pretty straight forward. They’ve got simple rules for code of driving conduct, which all of the drivers understand, so my role is to look at those and make a judgment, tell the stewards what I think and that’s about it.

“I think a lot of people think that the DSO makes all of the calls, but they don’t.”

Crick says that his role will be a one-off and has no desire to continue in the position.

“I’ve got enough enemies. I don’t need anymore!” he joked.

“Seriously, I’m just doing it to help out. I did it with the Australian GT class for a year, because I thought that I could help that category. I had quite a good year with them, but it’s not something that I see myself doing full-time.”

The Falken Tasmania Challenge for V8 Supercars kicks off this Friday.