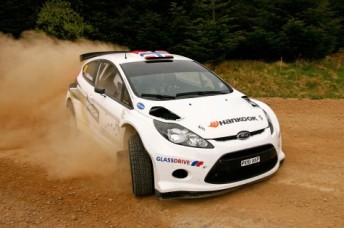 Co-driven by fellow Norwegian Ola Floene, Mikkelsen set a scorching pace over the opening 25-kilometre mixed-surface run to establish an interim lead of 10.3 seconds. And he maintained his advantage over the second test to eventually beat Nasser Al-Attiyah by 8.2s in a tense finish, despite going slower than the Qatari driver on the final run.

Both runs over the stage were held in baking sunshine against the backdrop of the Mediterranean island’s spectacular landscape. Mikkelsen put his victory down to his “full attack” approach on the first run and a slightly more controlled effort on run two when he was able to preserve his lead.

Mikkelsen’s victory made up for the disappointment of retiring on the opening day of the FxPro Cyprus Rally, the 12th and final round of the 2010 Intercontinental Rally Challenge, which ran from 4-6 November. “I really should have won that too so this does make up for it in some way,” he said.

Behind Mikkelsen, Cyprus Rally winner and second-placed Al-Attiyah said he had not been able to live with his rival’s pace: “I am quite happy because it has been a good weekend for us but maybe Andreas had an advantage. He had a new exhaust on his car, which gave him an extra 13bhp.”