Meyers clean sweeps on his way to Title

Meyers clean sweeps on his way to Title 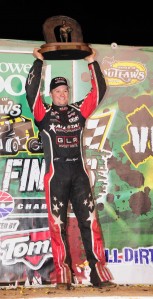 Californian Jason Meyers has taken a clean sweep of the two feature races in the Lowes World of Outlaws World Finals at The Dirt Track at Charlotte to claim the 2010 World of Outlaws crown.

Meyers put his name in the records books as the first driver ever from the state of California to win a World of Outlaws title and became just the eighth driver in the storied 30-plus year history of the series to be crowned champion.

He had previously finished second in the series standings three times in his career, including in each of the last two years to Donny Schatz.

“Being the first from California and just the eighth ever is incredible. To be able to put your name on that list, that’s why you do this.

“You work at it every day, because that’s what you strive to achieve. I’m looking forward to coming back and defending it next year. We have a great team here.”

Meyers drove a specially painted All Star Performance KPC for both of the rounds of the World Finals, and wound up leading a total of 33 of the 50 laps of feature racing competition on Saturday. Inclement weather on Friday led to the doubleheader on Saturday afternoon and evening, with the cars first taking to the track in the morning for heat races.

“Words can’t describe how excited we are,” said Meyers.

“We have been working at this for a long, long time. To come out here both of them is unbelievable. Everyone on this team works hard every day, no matter what. It’s just really incredible and I couldn’t be happier for everyone on this team and every single person involved.”

Meyers lined up second in the opener and chased Sam Hafertepe Jr. in the early going. Hafertepe encountered traffic on the fifth lap and just two circuits later Meyers closed in before taking the lead. Hafertepe battled back and spun in turn two while running second on the next lap as he tried to retake the lead, bring out the first caution of the race.

On the ensuing double file restart, Meyers chose the high line and jumped out to a quick lead over Joey Saldana. Despite encountering another double final restart Meyers would pull away from Saldana at the end to score his third win in the World Finals.

In the nightcap, Meyers again started on the outside of the front row. Daryn Pittman jumped out to the early lead from the pole and began to pull away before hitting traffic on the fifth lap. The only caution of the race came on the sixth circuit, with Pittman choosing the low line for the double file restart.

The lead pair was in traffic on the 11th lap, with Meyers again going low in turns three and four to take the top spot. He would quickly pull away and led the final 15 laps on his way to his career-best 11th A-Feature win of the season.

Saldana ended up second in the Budweiser Maxim in the opener to help secure the second spot in the owner standings for his Kasey Kahne Racing Team.