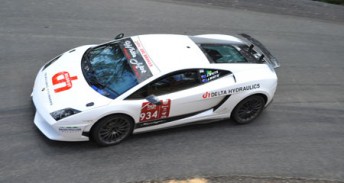 Tasmanian Jason White has overcome a major set back on the morning of the final day of Targa High Country to charge home and grab an unlikely victory in the first round of the Australian Targa Championship.

He led home South Australian Kevin Weeks in another Lamborghini, with early leader Jim Richards taking third place at the wheel of his Porsche 911 GT2.

The RDA Brakes Showroom competition was won by Peter Brown in a Mazda3 Diesel, while former touring car star, Andrew Miedecke, was too good in the Shannons Classic Outright section.

Thinking initially that he was tied for the overnight lead, White then had 41 seconds added to his overnight time after officials reevaluated the derived time given to him from a stage late on the opening day.

Not put off, White, and co-driver, John White, charged across the morning’s four stages to move to within 13 seconds of the lead at the lunchtime break.

The afternoon turned into a tussle between White and Weeks in the two Lamborghinis.

Jim Richards, who was the overnight leader, could not match the pace of the Italian supercars in his Porsche GT2 across the morning and slipped back into third place, just over a minute behind White.

Despite the earlier penalty, White set up his victory with blistering times over the day’s two longest stages, the 29 kilometre Big River and Eildon tests, where he showed his rivals a clean pair of heels.

“It was tough to learn about the penalty, but it was probably fair as that’s what the rules say,” an elated White said.

“Without the added pressure, we wouldn’t have the smiles on our faces that we have now. There were so many dramas with the car with things breaking everywhere.

“In the last three stages it felt like something was broken with the steering and the wheels seemed to be flapping about, but we pushed through to the finish.”

Weeks, meanwhile, was happy with his second placing.

“We’re obviously disappointed not to win, but we gave it a big go,” Weeks said.

“The car jammed in fifth gear on two stages today, and that’s probably cost us the event.

“It’s been a fantastic rally. The roads are amazing and take so much commitment from a driver.”

Subaru driver Dean Herridge was at a horsepower disadvantage against his rivals, but pushed hard over the day’s tight and twisty stages, taking fourth place. One place further back was Matt Close in his Audi TTRS, one minute and 21 seconds behind Herridge.

The next round of the Australian Targa Championship is the Hobart based Targa Wrest Point, on January 29 and 30, 2011.