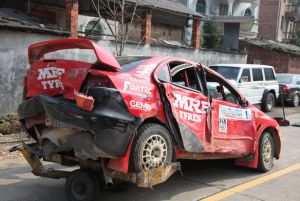 Japan’s Katsu Taguchi is the 2010 Asia Pacific Rally Championship drivers’ champion, although he crashed out on Stage 2 of the China Rally.

It was a big crash at nearly 150 kph and while the stage was stopped, thankfully Taguchi and co-driver were on slightly hurt.

First to stop and offer assistance were MRF team-mates Gaurave Gill and Glenn MacNeall and once restarted the pair should have gone on to win the title themselves, but they too crashed out a few stages later.

That left the only other title contender Rifat Sungkar but he too retired with differential problems.

After all the dramas Proton took the APRC lead with Queensland’s Chris Atkinson just ahead of team-mate Alistair McRae, but then Atkinson punctured and McRae took the lead.

In the final stage of the day Sumiyama’s Mitsubishi lost power to let his team-mate Hiroshi Yanagisawa take over the APRC lead by 5 seconds. McRae is third 1 minute and 17 seconds further back.

The MRF cars will not start the second day and therefore Katsu Taguchi is the APRC driver’s champion. Glenn MacNeall is the co-drivers champion and the only competition yet to be decided is the Asia Cup.

Sunday has six more stages totalling 83 kilometres before the finish.