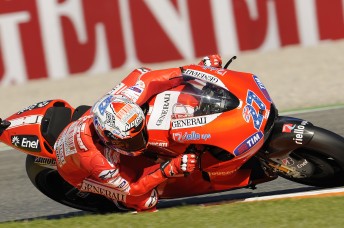 Casey Stoner on pole in Valencia

Casey Stoner put on a stunning display in his final qualifying session with Ducati to take pole position for the last race of the 2010 season at Valencia, posting the only sub-1:32” lap of the weekend so far in a strong 45-minute run.

The Australian’s hot lap of 1:31.799 left him 0.331s clear at the top of the timesheet, and came after he had dealt with an early run-off as he pushed hard for his fourth pole of the campaign.

“I actually made a couple of mistakes on my last two laps otherwise I think I could have improved it but the important thing is that I was able to give Ducati another pole position before I sign off,” said Stoner.

“There are a couple of sections where we need to improve for tomorrow but other sections that remind me of Phillip Island in the way I can attack them so overall I am comfortable and confident. It will be an emotional day I’m sure tomorrow but for now my job is to focus on the race and achieving the best result possible.”

World Champion Jorge Lorenzo followed Stoner onto the front row with a best effort of 1:32.130 on his Fiat Yamaha M1 having led for a large portion of the session.

Carrying his progress from the practice sessions into qualifying was Marco Simoncelli and the Italian rookie’s display was rewarded with his first front-row start in the premier class. The San Carlo Honda Gresini rider was just over a tenth of a second off Lorenzo.

A late surge from Valentino Rossi (Fiat Yamaha) placed the Italian fourth (+0.531s on Stoner) as he battled to find enough pace to challenge near the top end, with American duo Nicky Hayden (Ducati Team) and Ben Spies (Monster Yamaha Tech 3) also taking places on the second row of the grid.