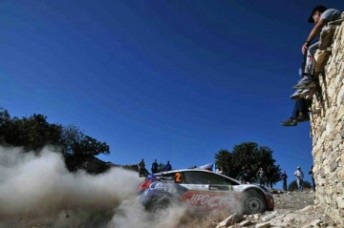 Czech driver Martin Prokop holds the lead at the end of the first full day of the FxPro Cyprus Rally.

The battle for victory on the 12th and final round of the 2010 Intercontinental Rally Challenge (IRC) is tightly poised heading into the second leg’s final six mixed-surface stages.

Overnight leader Nasser Al-Attiyah held the advantage after six runs. However, the combination of a 10-second time penalty for a reported jump start plus two punctures on the penultimate test allowed fellow M-Sport Ford Fiesta driver Prokop, who is starting his first IRC event of the season, to move ahead.

Prokop’s advantage stands at 12.1s and represents a significant reversal in fortune for the Czech driver after a troubled start to the event. He was two minutes late leaving first service to allow his mechanics to replace a broken front-left driveshaft, which failed on Thursday night’s opening Lemesos Super Special Stage and was handed a 20-second penalty as a result. He also said his choice of soft-compound tyre compromised grip on the Tarmac sections and reduced traction on gravel.

Roger Feghali is third in the sole Skoda Fabia S2000 on the event, a remarkable feat considering the Lebanese is nursing a bent left suspension arm, which he damaged on Thursday’s first stage. With no access to a spare, Feghali says he has been unable to attack due to the handling imbalance, which caused a spin on the penultimate stage.

Bryan Bouffier’s hopes of victory were dashed approximately halfway through Friday’s first 10.42-kilometre Kalavasos stage when he swiped a rock on the side of the road and broke his Peugeot’s front-right steering arm. The Frenchman was able to reach the end of the stage after spending almost 25 minutes making repairs by the side of the road. Following more work at midday service to restore his Peugeot 207 to full working order he was able to hit back by claiming three stage wins.

Andreas Mikkelsen didn’t make the start of Friday’s first stage after his M-Sport Ford Fiesta suffered engine failure on the road section heading to the test. The Norwegian was one of the favourites to win the event and now must wait to see if the fitting of a replacement engine will allow him to start Sunday’s Love Cyprus Golden Stage Rally.