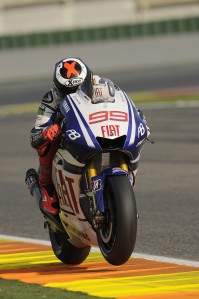 Jorge Lorenzo has set the pace in practice in Valencia

2010 World Champion Jorge Lorenzo has set the fastest time in practice for the season-sending Valencia MotoGP.

The Spaniard’s time of 1:32.690 at the end of the second free practice handed the Fiat Yamaha rider the best time of the session and day, as the World Champion set about preparing himself for an attempt at an eighth pole position of the season on Saturday.

Following Lorenzo on the timesheet in the afternoon was Australia’s Casey Stoner, who had been the fastest rider in the morning run. The Ducati man was the only rider in the session who did not improve on his time from earlier in the day and ended Free Practice #2 0.314s off Lorenzo’s pace. However, thanks to his earlier time he and the Spaniard were the only two under the 1:33” mark on Friday.

In third position Colin Edwards (Monster Yamaha Tech 3) was almost half a second off Stoner by the end of the session with his time of 1:33.466, with Italians Marco Simoncelli (San Carlo Honda Gresini) and Andrea Dovizioso (Repsol Honda) both within four-thousandths of a second of the American as they completed the top five.

Ben Spies (Monster Yamaha Tech 3) was back on his M1 after a fall during the morning, and the American placed sixth in the order, with Randy de Puniet (LCR Honda) and Marco Melandri (San Carlo Honda Gresini) – who had an early run-off – in the top eight. In unfamiliar territory in ninth position was Valentino Rossi (Fiat Yamaha), who was almost a full second off Lorenzo’s pace. Nicky Hayden (Ducati Team) completed the top ten.

Dani Pedrosa was 12th as he made a gradual improvement of almost two-tenths of a second on his morning effort whilst establishing a more comfortable feel on his RC212V.

Here are the practice highlights