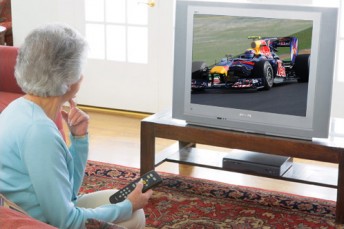 Mark Webber will be in the spotlight in Brazil this weekend

A pivotal weekend in the world of motor sport with Mark Webber on track in Brazil to keep his championship hopes alive being the pick of the bunch.

Casey Stoner’s final race with Ducati can be seen this weekend LIVE on ONE HD.  Qualifying for the Valencia Grand Prix can be seen at midnight Saturday. The 125cc race is LIVE on ONE HD from 8.50pm Sunday evening,  Moto2 from 10pm and the MotoGP from 11.30pm

LIVE NASCAR coverage starts with the Camping World Truck Series’ Winstar World Casino 350 – Texas from 11.30am Saturday morning on SPEED TV. LIVE at 4.10am Sunday morning is the Nationwide Series’ O’ Reilly Auto Parts Challenge from Texas. The Sprint Cup Dickies 500 from Texas is LIVE on SPEED TV from 4am Monday morning.

V8Xtra this weekend can be seen at 11am Sunday morning on Seven. This week Trading Post Racing’s Jason Bright will be the special guest along with hosts Neil Crompton and Mark Larkham.

You can also catch Crompton and Mark Skaife on Triple M in Sydney, Melbourne and Brisbane on Saturday morning. This weekend the boys speak with V8 Supercar Safety Car driver Amber Anderson on unusual driving jobs. Chris Styring about his role as Ford Racing boss in Australia. Aussie NASCAR ace Marcos Ambrose. Greg Rust brings listeners up to date on F1 and MotoGP. Plus three-time Melbourne Cup winning jockey Glen Boss on his role as an FPV ambassador. For the broadcast and podcast details click here