Tatnell out for opening stint of WSS

Tatnell out for opening stint of WSS 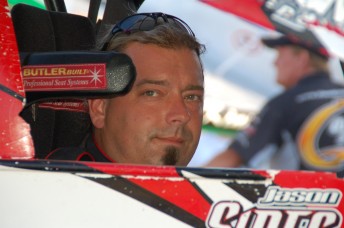 With family commitments and the birth of his new-born son, Garrett, keeping Tatnell in the United States until Christmas Krikke MotorSport has been forced to go searching to a driver to ‘fill the gap’.

As a result World of Outlaws star Jason Sides will take to the track aboard the Toyota Genuine Parts-backed Cool Chassis for the opening stint of the 16-round series.

Sides, who is a multiple World of Outlaws feature winner and has also enjoyed victory at the Kings Royal, already has a strong link with the KMS team having worked with crewman Shane Finch for the past six years in the US.

“I’m really looking forward to getting down to Australia and do some racing there again,” said Sides, who will this weekend compete in the World of Outlaws World Finals at Charlotte before jetting down under.

“It’ll be good to go do some racing with Finchy and to catch up with all the KMS team again. I’m just hoping we can put on a good show for the fans and leave the team with a good chance of winning the World Series yet again.”

And although disappointed that Tatnell is unable to make it out for the first four weeks of the series, KMS team boss Shane Krikke is excited about the prospect of Sides stepping into the team.

“Brooke is disappointed that he’s not able to make it out for the start of the season with us, as we all are believe me, but at the end of the day we realize that family is the most important thing and that far out ways racing,” said Krikke.

“But we have taken steps to keep our fans and supporters happy and although unfortunate for Brooke that he may not be able to realize his dream of another World Series Championship title this year, KMS is still aiming at being the championship team once again come the end of the championship and I believe that Jason can help us achieve this.

“Jason is a hell of a racer and a great knock about guy so we are excited by the prospect of racing together. It should be a lot of fun! I am sure he will put on a great show for the fans and all of our sponsors! Let’s face it, you don’t make a living on the road as a privateer if you are no good at your craft.”

The 2010/2011 World Series Sprintcar Championship kicks off at the Brisbane International Speedway on November 20.