James Davison will compete in a celebrity karting event this weekend, but has an eye on his future – and he wants it to include V8 Supercars.

It is the second year that Davison will compete in event, racing against Nelson Piquet Jr and Salvador Duran last year.

After the kart race, Davison will fly out of the Caribbean to attend the Sandown V8 Supercars meeting where he plans to speak to a number V8 teams. 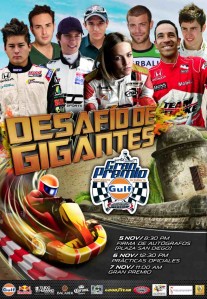 The poster for this weekend's kart race in Colombia

After finishing second in the Indy Lights Series last year with Vision Racing, Davison (son of former Sandown Raceway promotor Jon and cousin of V8 drivers Alex and Will) has sat on the sidelines in 2010 due to a shortfall in budget.

He told Speedcafe.com.au that he is keen to get back into the driver’s seat next season – and it could be one of a variety of race cars.

“My plans for next year are not clear at this stage due to the massive impact the economy has had on motorsport in the US,” he said.

“There’s a chance that I could do the road courses in IndyCar, if Tony George is able to reactivate his Vision team. This would be very much a continuation of our successful Indy Lights season.

I am currently in talks about a ride for the Daytona 24 in the Grand Am Rolex Series, which would be great to compete in after the successful experience I had at the 6 hours of Watkins Glen.

“My primary focus right now, though, is to use the experience I have gained racing in the US in the last 5 years to secure a V8 enduro seat. I really want to compete back in Australia in the big races. Grand Am has been a great tool for this.”