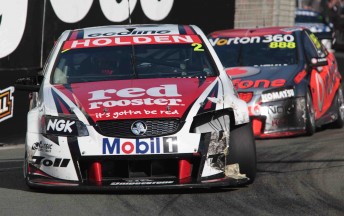 With six races still to run in this year’s V8 Supercars Championship Series Holden has already clinched the 2010 Champion Manufacturer’s Award, thanks to its victories at the recent Armor All Gold Coast 600.

Holden Commodore drivers have now won 14 of the 20 championship races held so far, meaning that ‘The General’ cannot be beaten to V8’s manufacturer’s prize.

The award is given to the manufacturer that wins the most races in each Championship Series season.

This year, new Holden recruit TeamVodafone has taken 11 of those victories, including the team’s incredible one-two success at the Supercheap Auto Bathurst 1000, while Toll Holden Racing Team’s Garth Tander has taken three wins.

The other six races won by Ford have been claimed by James Courtney (four) and Mark Winterbottom (two). Holden Motorsport manager Simon McNamara said that he Holden is proud to have picked up the award with six races to spare.

“It’s a great achievement. We have two boxes ticked (Manufacturer’s Award and Bathurst), now we’ve got one more to go,” McNamara told Speedcafe.com.au.

“It’s a pretty significant award for us. There’s a number of employees at Holden who are pretty proud of the fact that we are associated with winning this award. All of those guys, and all the supporters of Holden, we’re proud to take the award away for them.”

McNamara says that while the manufacturer’s title is significant, all focus now turns to the championship.

“It’s anyone’s guess how the next few rounds will pan out,” McNamara told Speedcafe.com.au.

“James has been very strong on the Sprint tyre, and I’d suggest that he’ll be strong again at Tasmania. He’s a quality driver that is leading the charge for the other brand.

“But if you look at how Jamie drove on Sunday at the Gold Coast, it shows that he’s not prepared to settle for second. He’s a driver that will fight until the end, and you’ll probably find that Craig Lowndes will be there or there abouts at the end too. It would be magnificent for Craig, on his return to Holden, to win the championship.

“For Craig to get up from here, someone ahead of him is going to need to have a bad couple of races. Symmons Plains, being the track that it is and what it can produce, he has got to be a chance. Look at the results in the last few races at Symmons …

“Then when we go to the Sydney street race, it could be anyone’s game.”

While the Holden motorsport chief hopes for a ‘red’ win, he says for the championship’s sake, it would be best for the driver’s title to go down to the wire.

“I think it will be very close at the end of the year,” he said.

“Hopefully for the championship and the TV, it is very close, and hopefully a Holden wins too.”

This year is the first time Holden has won the Manufacturer’s Award since 2007. Ford Falcons have helped the ‘Blue Oval’ win four of the last five awards since 2005.