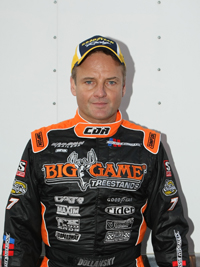 Craig Dollansky and Donny Schatz have set the pace during qualifying night at the fourth Annual Lowes Foods World of Outlaws World Final on The Dirt Track at Charlotte.

With a stellar 56-car field on-hand for the final event in the 2010 World of Outlaws Championship Dollansky circled the high-banked four-tenths-mile in 12.538 seconds to best field for Friday’s session of qualifying, while Schatz turned a lap 12.699 seconds to take the top spot in the second round of qualifying for Saturday.

Dollansky has set fast time twice this season aboard the Big Game Treestands Maxim, also turning the quickest lap in the series last race at Tri-State Speedway in Indiana on October 16, an event the native of Elk River, Minnesota won.

“Anytime you can start the night off with quick time is a great start to the night,” said Dollansky after the first round of qualifying.

“Qualifying is definitely a big part of our racing. To get quick time tonight for Big Game Treestands and Aggressive Hydraulics is great. We made some changes after hot laps and my Crew Chief D.J. Lindsey did a great job.”

Schatz set fast time was his fifth for the season in the Armor All/STP J&J and for the third time in the last four events during the World Finals. The four-time and defending series champion earned five bonus points in the series championship standings for setting fast time and trails Jason Meyers by 92 markers with the final two races of the season remaining.

“It was a great lap,” said Schatz.

“We weren’t so good in the first set. We actually feel kind of silly, because we figured out our problem where we have been struggling with our car and applied that to the second and voila. I can’t wait till next year.”

Jason Meyers, the current World of Outlaws championship point leader, was 13th in time trials for Friday night’s event which will put him on the pole of a heat race. The California native was fifth quick in the second round to earn one bonus point in the standings. The veteran has earned the most qualifying bonus points of any driver this season.

Tim Shaffer, who won earlier this season with the World of Outlaws at I-55 Raceway in the opener of the Ironman 55 at I-55 Raceway, was second fastest in both sets of time trials on Thursday night aboard the Kistler Engines J&J.

Steve Kinser, who is currently third in the World of Outlaw championship standings, was fifth quick in the first round of time trials to earn one bonus point in the standings and esd third quick in the second round to earn three bonus points. He trails Jason Meyers by 97 points.