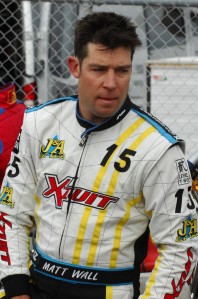 Wall, who has represented his country on several occasions previously in the World Rotax Challenge Final and All Japan Yamaha qualifier, believes the November 19-21 event will be the biggest he has ever competed at.

“The SuperNationals is undoubtedly the biggest in terms of the names that I will be competing against and it is the most nervous I’ve been for a long time preparing for a race,” said the ten-time Australian champion.

“Racing side by side against he factory supported drivers, and drivers from a variety of other motor racing series’, is going to be a real thrill.

“I’m both nervous and excited because I want to see what level Australia has against the world’s best.

“I’ve done everything there is to do in Australia, this is going to be the hardest thing I’ve ever done in my career but I’m going over there with the attitude of aiming to simple do my best with whatever we’ve got and fly the Aussie flag high.”

As a part of his prize for winning the Pro Gearbox (KZ2) category in Australia’s elite karting series Wall received funding towards his Vegas trip from the Australian Karting Association.

Joining Wall on the grid at the SuperNationals in the elite KZ2 Gearbox category is the man he defeated win the Stars of Karting crown, Kel Treseder. After missing out on the championship by a mere six points Treseder went on a fundraising mission to secure his place in the 40-kart field that continually attracts the who’s who in the world of motorsport.

This will be the first time that Australia has had two representatives in the Main Event at the SuperNationals that will be held on a temporary street circuit at the Rio Hotel & Casino in Las Vegas.

Adding further strength to the Australian contingent at the event will be the largest ever number of drivers competing in other categories across the weekend. These drivers include David Sera, the father and son duo of Kip and Scott Foster from WA, Victorian youngster Adrian Lazarro, Eric Smith, Kristopher Wall and Scott Saunders.