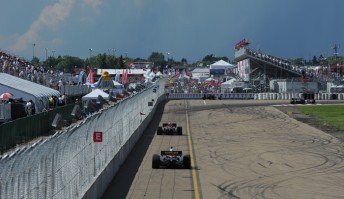 The popular Edmonton airport event is no more

The Edmonton airport race has been dropped from the 2011 IZOD IndyCar Series after the demise of the popular Canadian event.

Octane Motorsport Events, promoters of the Edmonton race, were unable to settle a dispute with the City of Edmonton, leaving OME to withdraw from its deal to promote and manage the race.

The dispute centred around city officials wanting to move the circuit to a different area of the airport, which would allow primary runways to remain operational, but with neither side prepared to take on the estimated C$3.2million relocation expense, the event that has drawn huge crowds since its birth as a Champ Car race in 2005 is no more.

IndyCar CEO Randy Bernard was disappointed that despite the consistently large crowds at the Edmonton event, the event could not continue.

“It’s unfortunate that in a time when IndyCar is experiencing momentum and growth, the city would want to miss out on the opportunity to be part of it,” said Bernard.

“We’ve enjoyed our time at Edmonton as the fans there truly embraced Indy car racing.”

Bernard left the door open for a replacement event, ideally in Canada as the Edmonton race was part of a two-race ‘swing’, paired with the Toronto event.

“We currently are examining options for our schedule to see if there are opportunities to replace the event,” said Bernard.

This year’s Edmonton race was won by Scott Dixon in controversial circumstances after Helio Castroneves was penalised for blocking his Team Penske team-mate Will Power at a late-race restart.

The Edmonton layout was popular among drivers as one of the fastest and demanding street or road courses on the schedule. It was also the venue of Australian driver Power’s maiden IndyCar win in 2009.

If the Edmonton event cannot be replaced, the 2011 IZOD IndyCar Series will now expected to be staged over 16 races, with the series finale, expected to be at Las Vegas Motor Speedway on the weekend of October 15-16, still to be confirmed.

The yet-to-be-confirmed Las Vegas race will be one weekend before the 2011 Gold Coast 600, allowing drivers such as Will Power, Ryan Briscoe, Scott Dixon, Dario Franchitti, Helio Castroneves and Alex Tagliani to all return to the Surfers Paradise V8 Supercar event next season.

Tony Kanaan, Ryan Hunter-Reay, Paul Tracy and Justin Wilson are also expected to figure in planning for the 2011 Gold Coast event, which is likely to feature 29 international drivers, over and above the 18 from this year’s event, meaning that each car will field an international guest.