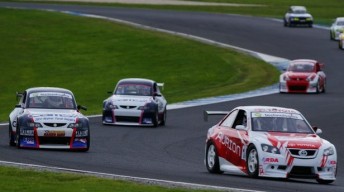 The Aussie Racing Cars at Phillip Island earlier this year

The final round of the Aussie Racing Cars Series will be held this weekend at Queensland’s Morgan Park Raceway, with a number of celebrity drivers competing.

Perkins will get back behind the wheel of the #14 Toyota Aurion. He missed a round due to his V8 commitments clashing and sits in 11th place in the series. He won the last round Eastern Creek.

For Yates, Grice, Qinghua and Macready, it will be their debuts in the pint-sized Aussie class.

At Morgan Park this weekend, Ward will test a new sized wheel on the Aussie Racing Cars, with the possibility of a change of regulations for 2011.

On his own car, Ward will test a 15-inch wheel, a step up from the 13-inch rims that have been the standard on the cars for the past 10 years.

The Morgan Park meeting will be held alongside the final round of the Queensland state circuit racing championships.