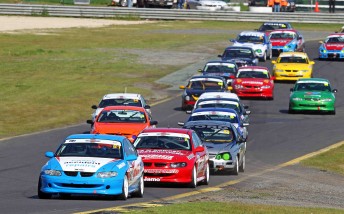 The start of the Saloon Cars at Sandown last month

The 2011 Shannons Nationals Motor Racing Championships calendar has been revealed, with rounds scheduled for seven circuits over nine race meetings between April and November 2011.

The calendar announcement – the sixth season of ‘The Nationals’  – includes the extension of Shannons Insurance’s naming rights sponsorship of the Championships, which dates back to the start of the 2007 season.

Shannons Insurance Sales Manager Paul Gates says that he is pleased to continue the company’s association with the Championships for a fifth season.

“Shannons is very proud of our association with the Nationals, and we are very excited about the growth that series is currently experiencing,” Gates said.

“With an expanded category line up and several new initiatives with not only the format of the racing, but also the television and internet broadcasts, the Shannons Nationals will reach its biggest ever audience.

“I expect that the Shannons Nationals will be taken to the next level in 2011.”

The series will consist of seven fully-fledged events, with two other events to be held in conjunction with the Australian Production Car Endurance Championship (APEC), which will include six-hour races at Eastern Creek Raceway (May) and Phillip Island (November).

The APEC will incorporate the Australian Manufacturers Championship, which will also include a points-paying round at the Morgan Park Shannons Nationals round.

These new initiatives will be announced in the coming weeks, which will add to existing hallmark rounds, such as the Clem Smith Cup for the Kerrick Sports Sedan Series at Mallala, and the Commodore Cup National Series Enduro at Winton Raceway.

The Shannons Nationals will also have an expanded television presence, with the launch of the dedicated motorsport pay-TV channel SPEED.

Featured programming will include a new studio based motorsport show, Full Noise, at 6:30pm on Tuesdays, with full racing action also shown on Speedweek and Inside Speed, with both programs receiving a makeover for the new season.

The Shannons Nationals will continue to be broadcast on free-to-air television, with the continuation of Speedweek on SBS ONE.

After hosting the season finale for the past four years, the Sandown Raceway round will move to August, leaving the season to conclude with a pair of rounds at the Phillip Island Grand Prix Circuit.

“The Shannons Nationals has been evolving ever since 2006, and I think that our 2011 calendar will provide a solid platform for continued growth into the future,” Series Director Rob Curkpatrick said.

“It’s fantastic to have Shannons Insurance continue their involvement as naming rights sponsor, we’re very proud of the association, and we hope it continues for many years to come.

“Nine rounds with reasonable spacing fits well for our competitor base, while we have been working very closely with the circuits to ensure minimal clashes with other major events.

“In 2010 the Shannons Nationals instigated the Australian Six Hour as a new hallmark event for the Australian Manufacturers Championship, and we are pleased to remain associated with the Six Hour races at both Eastern Creek and Phillip Island.”

The final category-by-category make up of each round will be announced in the coming weeks.