Courtney and Falcon hit the waves off Bondi

Courtney and Falcon hit the waves off Bondi 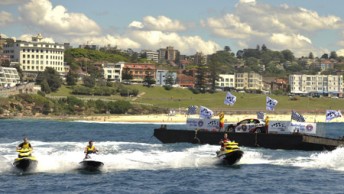 Can V8 Supercars Championship leader James Courtney walk on water? No, but his car can float on it …

Bondi Beach locals were treated to a rare site today as Courtney’s Jim Beam Racing Falcon was floated down the harbour, coming to rest out the back of Bondi’s famous surf.

Marking one month until the second-running of the Sydney Telstra 500, drivers Courtney, IRWIN Racing’s Alex Davison and Dick Johnson Racing’s Jonathon Webb splashed into Sydney on the back of jet skis, promoting the Homebush-based street race.

Courtney, the current leader of the V8 Supercars Championship Series and winner of the inaugural Sydney Telstra 500, said he is hoping to add another Sydney win to his record. “The Sydney Telstra 500 is only one month away now and is also the Championship Series grand final,” he said.

“I can’t wait to come back to Sydney Olympic Park to drive the street circuit designed by our very own Mark Skaife and see if I can’t get another win out of the track.”

The Sydney Telstra 500 – V8 Supercar’s grand final – will be held on the streets of Sydney Olympic Park from Devember 3-5. As part of the festivities, legendary rockers Guns N’ Roses will headline the Saturday night music show.

Also, the ‘Master of Skate’ Tony Hawk will be at the track, performing four shows to showcase his signature moves.