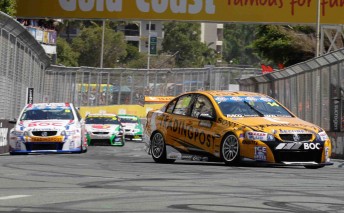 Brad Jones Racing is not panicking with the recent announcement that it will not receive support from the Trading Post next year.

Trading Post, owned by Telstra, will end its sponsorship of Jason Bright’s #14 Commodore VE at the end of this season, with the company set to join Ford Performance Racing in 2011.

While disappointed with the company’s withdrawal, team co-owner Kim Jones is not flustered, telling Speedcafe.com.au that he is focusing on the future.

With long-time team backer BOC Gases recently re-signing with the team for 2011, Jones says that he is now looking for a backer for Bright’s #14 entry, as well as a sponsor to enter Andrew Jones in the Fujitsu V8 Series – possibly as early as next year. 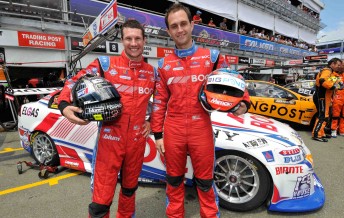 “Our focus at the moment is to get our Main Series sponsorship locked away,” he told Speedcafe.com.au.

“We’re out there now shaking cans, trying to find someone else.

“We’ve got 10 weeks. When you take out the Christmas break, there’s probably four or five workable weeks. But look, it’s par for course. We’ve just got to get out there and make it happen.”

Jones said that locking in his Championship Series sponsorship is the priority, however, entering a car in the Fujitsu Series is close to his mind.

With Andrew Jones, BJR won the 2004 Development Series, and considering the new endurance driver rules, keeping co-drivers race-ready has become a new factor for many teams.

“We do harbor an ambition to do the Fujitsu Series again, but the amount of time that we were going to spend trying to find a budget for that, we’ve had to reprioritise to find the backing for Bright’s car,” he said.

“We run a Formula Ford for Tom Williamson, and the logical step beyond Formula Ford is the Fujitsu V8 Series, so we’re pretty keen to get back into that.

“I think Andrew did a very good job this year in the endurance races with limited miles. If we could put together a program where we could run him in the Fujitsu Series, we would.

“We have the car to do it and he’s champing at the bit to get back into it.

“There’s some very good reasons to do it, especially with the testing and the amount of miles that your co-driver gets. It’s handy to have two people who you can run at the pointy end of the field.

“Ultimately, we will run Fujitsu cars again but at this very moment, it is low on our priority list.”

With plenty of work to do off-track, Jones says that he is pleased that his team’s on-track results continue to encourage.

“The good thing that we have, as a group, is car speed,” he said.

“The last five circuits, from Darwin onwards, have been quite different configurations, and our cars have been very fast at all five circuits. There’s no reason why that will change.

“If Brighty didn’t belt (team-mate Jason) Richards on Saturday, we would have had three cars in the top 10.

“On Sunday, we didn’t have any cars finish, which is a bit of a hiccup.

“But you’d have to say that in the Holden camp, there’s the two Vodafone cars and Garth Tander (Toll HRT) that are probably better than us on average, but we’re not that far behind them …”