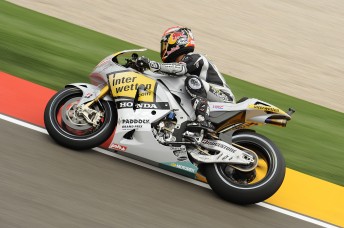 Satellite Honda outfit Interwetten MotoGP Team has announced that it will not participate in the 2011 MotoGP season.

Interwetten will focus its efforts on Moto2 for 2011 with Tom Lüthi, and prepare for a return to the premier class in 2012.

The team only joined the premier MotoGP ranks this year with 250cc World Champion Hiroshi Aoyama. The Japanese rider currently sits 15th in the standings and is expected to announce in Valencia that he will ride the San Carlo Gresini Honda squad with Marco Simoncelli next year.

“It is a pity that the team cannot continue. I had a really good time with them and I want to thank the team for all they did for me,” said Aoyama.

“Sometimes I have a good feeling at Valencia and sometimes I don’t. I hope that this time the feeling will be good. Last year I achieved the 250cc world title there and I have some nice memories because of that, but you cannot compare this. I hope that the coming race will be better than the one in Estoril, where I could have finished in the top 10 but made a mistake and had to be satisfied with 12th at the end.”

With the exception of some events that had guest riders, MotoGP has run with 17 bikes compared to 39+ fields in the all-new Moto2 class in 2010.