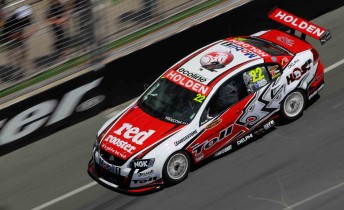 WIll Davison at the Armor All Gold Coast 600

A meeting at Walkinshaw Racing headquarters tomorrow will help determine which drivers race which cars in the remaining rounds of the V8 Supercars Championship and the Fujitsu V8 Series.

The factory Holden squad has endured some of the sport’s highs and lows in the past two rounds. At Bathurst, Garth Tander and Cameron McConville took the #2 Toll Holden Racing Team Commodore to third place, while Fujitsu Series driver Nick Percat scored his first-ever podium in the series, driving in Bundaberg Red Racing colours.

While there was success for some in the WR camp, there was damage for others. Fabian Coulthard flipped his Bundy Red racer in the opening lap of the Bathurst 1000. Also, Will Davison trashed his Commodore at Bathurst and used one of the team’s spares on the Gold Coast.

At the Gold Coast, Coulthard drove the Percat car, and Coulthard is likely to remain in that vehicle for the rest of the year.

So, what car does Percat use at Sandown – the penultimate round of the Fujitsu V8 Series?

The Walkinshaw Racing meeting is expected to clear that issue on Wednesday, however, it is likely that Will Davison will step back into his repaired mount that he crashed at Bathurst, and Percat will get the car that Davison shared with Ryan Briscoe on the Gold Coast.

Percat told Speedcafe.com.au that the Wednesday meeting will clear up the chassis question.

“I’m not sure what they’ve got planned. We’ll just wait and see,” he said.

“There’s a meeting on Wednesday, but hopefully there is a spot for me.”

In his debut season, Percat currently sits in second place in the Fujitsu Series. He started the year with Jay Motorsports before switching to Wakinshaw Racing at Bathurst. Percat is 175 points behind title leader Steve Owen and 30 points clear of Bathurst winner David Russell.