Luff: Aiming to be the best one-car V8 team

Luff: Aiming to be the best one-car V8 team 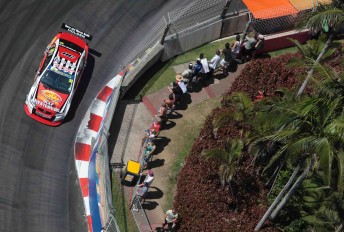 New Gulf Western Oils Racing driver Warren Luff has outlined his first goal with his new team – to be the best single-car entry in the V8 Supercars Championship Series.

Luff was announced last week as the driver of the #30 Lucas Dumbrell Motorsport-prepared Commodore VE, placing him in the seat for the final three events of 2010 and the entire 2011 season.

The Gold Coast resident, who has driven with James Courtney in the Jim Beam Racing Falcon for the past three events, said that he wants to drag the Gulf Western Oils car to be the best of the single car entries.

“My expectation for the tail end of this year is really just for me to learn the team, learn the car,” he told Speedcafe.com.au.

“We’re not really going into it with any expectation.

“The next three race meetings is a great learning opportunity and the perfect test bed for next year.

“For us, we’re aiming for top 10 race results, and during the year, if we can stick it in the top 10 in a few shootouts, that would certainly put smiles on the team’s face.”

Luff said that it is simply a coincidence that Orr is there, saying that all all his dealings were done exclusively with Dumbrell.

“Dean and I worked together back when I did the enduros in 2003 and the full season in 2004. Dean is a great guy and we get along well,” he said.

“Dean has been part of the whole process, but all the dealing for the drive have been through Lucas. Dean has given his opinion, but Lucas makes all of the decisions. Lucas and I have been talking for a while and I’m very happy that we’ve been able do a deal.”

While Luff has a lot of experience in the V8 Supercars Championship Series, next year will only be his third full-time season.

For the past three years, Luff has been a key part of DJR’s endurance line-up. This year, he was given the responsibility of partnering title leader Courtney.

“I’ve been with DJR doing the enduros for the past three years, and this year has been a big year for the team,” he said.

“It has been great to be a part of the journey and being a part of getting them to the front of the grid where they belong. Hopefully I’ve been able to play a small part in what will be James’s championship-winning year.

“I had some great times there and made a lot of great friends. It is sad to leave, but obviously I’ve had something present itself more full-time for myself. They’ve wished me all the best. It is exciting to be back part of the championship full-time, rather than just an enduro driver.”

Luff will get his first drive of the Gulf Western Oils Commodore VE at Symmons Plains for the Falken Tasmania Challenge in two weeks time.