Lorenzo hunts down team-mate to win at Estoril

Lorenzo hunts down team-mate to win at Estoril 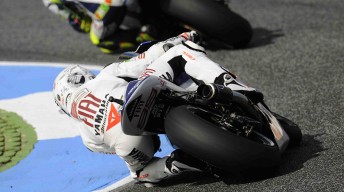 Jorge Lorenzo put one over his team-mate and rival at Estoril, taking victory in the bwin Grande Premio de Portugal.

Lorenzo’s win was his third-consecutive at the Estoril circuit, finishing ahead of fellow Fiat Yamaha rider Valentino Rossi and Repsol Honda’s Andrea Dovizioso.

It was Lorenzo’s eighth win of his title-winning season.

Due to wet weather, qualifying was cancelled, meaning that the first dry running that the teams had done all weekend was on the sighting lap before the race.

This caught out American Ben Spies, who crashed heavily and was out before the bikes had even gridded up. He dislocated his ankle in the incident.

Lorenzo started from pole and led the opening laps before Rossi pulled off a cheeky move at the left-hand hairpin. Rossi put a small margin on Lorenzo until the Spaniard started to reel him in, eventually taking the lead on lap 17 of 28.

Rossi’s second place had put him within striking distance of taking second in the world title. He now sits 19 points behind Honda’s Dani Pedrosa.

Australian Casey Stoner looked like the only man who was going to threaten the run-away Yamahas, but he fell off his bike early. The crash has ruled him out of finishing second in this year’s title.

Third place went to Dovizioso, who was engaged in a thrilling battle to the finish with San Carlo Honda Gresini rider Marco Simoncelli. Dovizioso took the podium spot by just 0.059s.

Ducati Team rider Nicky Hayden was also in the hunt for the podium, finishing just over half a second off the podium.