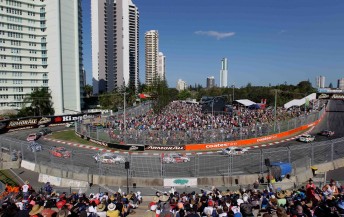 Over 170,000 people rolled through the Gold Coast gates over the three days

The international format for the Armor All Gold 600 is set to continue, however, a number of key tweaks to the format have been mooted by V8 Supercars Australia.

Also, to even up the playing field and reduce costs, it was mooted that the international guests will not be able to come to test for the respective teams, or drive in the Phillip Island or Bathurst endurance races.

Under the proposed rules, the only pre-Gold Coast 600 V8 laps the internationals would receive is at the Wednesday test session at Queensland Raceway, prior to the Gold Coast street race.

IRWIN Racing’s David Brabham was the only international to compete in all three enduros at Phillip Island, Bathurst and the Gold Coast, while Ryan Briscoe drove for Bundaberg Red Racing (Bathurst) and Toll HRT (Gold Coast).

The proposed rules are yet to be ratified by the V8 Supercars board.

“You’ve got to have everyone with the international drivers, not just the 18 drivers,” said the three-time Indy 500 champion.

“It needs to be the full field. It’s not fair for the others. I understand that everybodfy is fighting for the championship. We’re professional. We don’t want to mess these guys around, but at the end of the day, it was a great concept. There were people really enjoying having us around.

“Hopefully we’ll be invited back next year and we’ll go even better.”