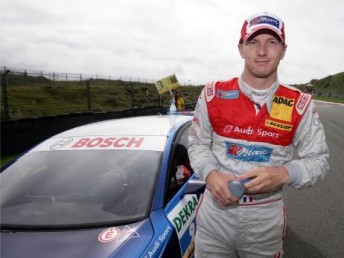 Officials from Audi and Mercedes have hailed the safety of the current DTM cars after Alexandre Premat walked away from a horror shunt at Adria in Italy.

The Frenchman’s Audi A4 speared into the wall and somersaulted opposite the pits at the end of the first lap after he was clipped by Maro Engel.

The crumpled remains of the Audi came to rest up against the wall, and Premat climbed from the remains just a few seconds later.

“I spoke to Alex soon after the accident, and it looks like he is fine,” said Audi Sport boss Dr Wolfgang Ullrich.

“We can be very proud of the cars that we have built in the DTM. The rulebook keeps safety as the first priority, and that will remain the case with the next generation of cars.”

“Safety has always been the centre of our attention,” he said. “This is the most important thing.

“The accident looked shocking, but it looks like Alexandre is fine. The most important point is that nothing serious has happened to him.

“Lots of people have worked to create the safety cell that we have at the moment, because this is the most important part of what we do. Total safety can never exist, but we can always work towards continued improvement.”

In the race, Timo Scheider took Audi’s second DTM win of the season from 15th on the grid, while Bruno Spengler took the championship lead back from Mercedes team-mate Paul di Resta.

Scheider made up a lot of places on the first lap, and then set a blistering pace when the leaders pitted. The reigning champion made his first stop with just seven laps to go, and his second stop just two laps later.

Scheider was able to employ his radical strategy because the race was 21 laps shorter than the planned distance, after the Premat accident.

Just before the red flag, championship leader di Resta had been spun around by Mike Rockenfeller (Phoenix Audi) at the last corner.

Spengler has retaken the lead of the championship from di Resta by three points, while Paffett has a slim chance going into the Shanghai finale nine points adrift.

Here is the Alexandre Premat accident