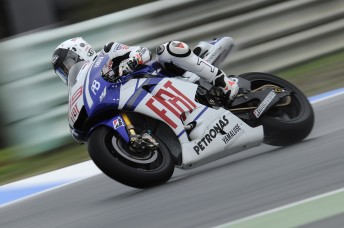 Fastest in practice earns Jorge Lorenzo the pole in Portugal

Heavy rain has led to the cancellation of the qualifying sessions at the bwin Grande Premio de Portugal. Jorge Lorenzo (MotoGP), Gabor Talmacsi (Moto2) and Bradley Smith (125cc) will start from pole based on the combined practice times.

With excessive water on the track surface, continual high winds and rain, officials were forced to decide at 2.30pm local time to call off the qualifying sessions, meaning that the starting grids for each race will be based on the combined times from the three practice sessions.

In MotoGP Jorge Lorenzo (Fiat Yamaha) will start from pole position, his seventh of the season, with Nicky Hayden (Ducati Team) and Valentino Rossi (Fiat Yamaha) completing the front row. The Italian himself started from pole at Motegi in 2009 after the qualification session was cancelled in similar circumstances.

“It’s just too bad with the wind and the water on the track, so I think it better to cancel the session,” said the 2010 MotoGP World Champion.

“It’s good for us because we have our seventh pole of the season! It may be one of the easiest, but I’m very happy and we’ll see what the weather offers us tomorrow.”

Casey Stoner (Ducati Team), Ben Spies (Monster Yamaha Tech 3) and Marco Melandri (San Carlo Honda Gresini) will comprise the second line, with the top six all taking their positions on the starting grid courtesy of their FP2 times. The returning Dani Pedrosa (Repsol Honda) will start from 12th and Carlos Checa (Pramac Racing) from 17th in his first GP since Valencia 2007.

In the Moto2 class Gabor Talmacsi (Fimmco Speed Up) will start from pole for the first time this season, ahead of Julián Simón (Mapfre Aspar), Toni Elías (Gresini Racing) and Kenan Sofuoglu (Technomag-CIP), meaning the Turkish rider will start his first World Championship GP from the front row. Andrea Iannone (Fimmco Speed Up), who is battling Simón for runner-up spot in the Championship, will start from down in 35th.

In the 125cc class Bradley Smith (Bancaja Aspar) will head up the grid for the third time this year, with fellow Brit Danny Webb (Andalucia Cajasol), rookie Alberto Moncayo (Andalucia Cajasol) and one of the three riders still able to win the 2010 title – Nico Terol (Bancaja Aspar) – on the front row. Championship leader Marc Márquez (Red Bull Ajo Motorsport) – who could claim the title this weekend – and the third rider still in the fight for the 125cc crown Pol Espargaró (Tuenti Racing) will start from 11th and 12th respectively.