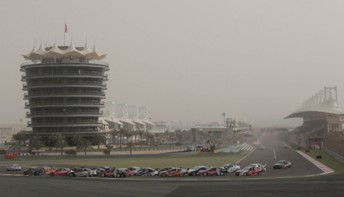 V8 Supercars will not visit Bahrain in 2011

V8 Supercars Australia has released its 2011 calendar late on Friday afternoon, confirming the cancellation of the Bahrain event and the inclusion of Australian venues at Ipswich and Perth.

The schedule also confirms that talks regarding an event at the Singapore Formula One Grand Prix in 2011 have not come to fruition – CLICK HERE for the latest on the situation in Singapore.

The championship will start in Abu Dhabi on February 10-12, with the Middle East double-header now scrapped due to the demise of the Bahrain event – CLICK HERE to find out why Bahrain has been dumped from the calendar.

The season will kick off and end in Sydney, with an official pre-season test for all teams at Eastern Creek Raceway on January 29 and the championship finale around the streets of the Sydney Olympic precinct, the Sydney Telstra 500, on December 2-4.

While the previously announced return of Barbagallo Raceway has been confirmed for May 6-8, Queensland Raceway in Ipswich has also earned a reprieve, filling in what was the mid-season break this year with an August 19-21 date.

The calendar, delayed several times by complications with talks in Bahrain and Singapore, is made up of 14 events as well as the non-points event at the F1 Australian Grand Prix in March.

The exact total of races for 2011 was not confirmed, with the Perth event previously announced as a three-race weekend. If all other events are staged to their 2010 format, the 2011 V8 Supercars Championship Series will be decided over 27 races.

“It is tremendous for all our fans and importantly our huge support base in Western Australia and south-east Queensland that we have been able to secure new deals at permanent circuits in both states,” said Whitaker.

“V8 Supercars looks forward to the new facilities that will be in place in Perth by the time of the 2012 Championship event. In the case of Queensland Raceway we thank both the Queensland Government and the Ipswich City Council for their efforts and assistance getting this venue locked into the Championship.

“The support that we have received from both the Government and the Council gives us the opportunity of creating a real differentiator for the Championship at Queensland Raceway. Our plans are to announce an exciting new development in late November.

“The significant date, venue and seasonal problems that setting a calendar creates has seen a huge effort by many people to make this a reality and I thank our Chairman Tony Cochrane for his support and guidance over a long period of time to reach this fantastic outcome.”

The late-season events in Tasmania and Sandown will again be held just one week apart to avoid a clash with the Seven Network’s coverage of the Spring Racing Carnival.

V8 Supercars Australia has also announced the calendar for the 2011 Fujitsu V8 Supercars Series – CLICK HERE for the news on that announcement and the full 2011 schedule for the second-tier V8 Supercar series.