Mark Warren is the new CEO of the Clipsal 500

Mark Warren has been appointed as the new Chief Executive Officer of the South Australian Motor Sport Board, promoters of the successful Clipsal 500 event.

Warren replaces outgoing CEO Jason Allen, who has left the role to take up the position of CEO at the New South Wales Waratahs Super Rugby franchise.

Warren comes to the role with more than 20 years experience in the Information, Communication and Technology sector, most recently as SA State General Manager at Optus.

Coincidentally, Allen joined the SAMSB in 2008 after holding the position of National Consumber Sales Manager at Vodafone.

Warren said that he was looking forward to the diverse range of challenges that major event management brings.

“The events business is an interesting mix, especially with our diverse and passionate fans of both the motorsport and off-track entertainment,” said Warren.

Warren, 42, moved to Adelaide three years ago from Melbourne. He told The Advertiser newspaper today that he has not missed a Clipsal 500 since making the move.

“I came from Melbourne three years ago to head up Optus in SA,” Warren told The Advertiser journalist Stuart Innes. 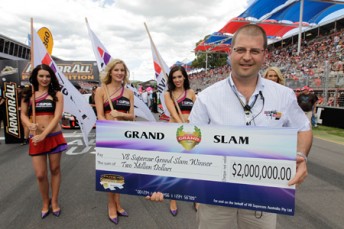 “I fell in love with the place and I’ve been to the Clipsal 500 every year. It’s tremendously exciting – a dream job if you love your motorsport.”

Warren becomes just the third CEO of the Clipsal 500 event since its birth in 1999, following in the footsteps of Allen and Andrew Daniels, the founding CEO of the event who is now the chief of the South Australian Motor Accident Commission.

Daniels, a former executive in the Adelaide Grand Prix office, led the successful event from its inception up until October 2008.

Roger Cook, V8 Supercars Australia independent board member and Chairman of the SAMSB, said he looked forward to Warren taking an active involvement right from the start.

“Mark has, I believe, the vision and the practical ‘hands-on’ approach that is required when you are leading the type of business we are in,” said Cook.