Hryniuk to start the flow of Aussies overseas

Hryniuk to start the flow of Aussies overseas 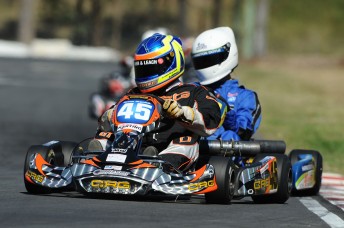 Jason Hryniuk on his way to victory in the East Coast Title earlier this year. Pic: photowagon.com.au

When Jason Hryniuk heads to Japan next week he will begin a flurry of Australian karters competing overseas in the month of November.

It is anticipated that in excess of 20 Australians will be competing at overseas events during the month with Hryniuk heading to compete in the All Japan Yamaha Championship, ten representatives heading to both the World Rotax Grand Final in Italy, a large contingent at the SuperNationals event in Las Vegas on November 19-21 followed by two Australian drivers competing in the WSK Nations Cup event at La Conca in Italy on the final weekend in November.

Hryniuk received funding towards his trip to Japan, which will be held at the Yamaha resort in Tsumagoi, by virtue of winning the East Coast Yamaha title, a series run in conjunction with the CIK Stars of Karting Series this year. He will be representing Australia against the best young drivers from across Japan, America, New Zealand and the Asian region.

“Since winning the title in August I’ve really been focused on this trip and preparing for it. Over the past few months I’ve been training pretty hard and I’m aiming for a top result,” said Hryniuk.

“I’ve raced a couple of times previously in Japan, it is a great place and always provides some exciting racing with drivers looking to make a name for themselves. I’m really looking forward to next weekend.

“A big thanks must go to Yamaha Australia for their continued support of Australian karters and also the organisers of the CIK Stars of Karting Series for once again providing a strong platform for an elite series in Australia. Without the support of these guys, none of this would be possible.”

Yamaha Motor Company Australia’s Adam Wolfenden believes that Hryniuk has got what it takes to out Australia in the winner’s circle at the event.

“Over the years we’ve seen drivers like Troy Hunt, Paul Laskazeski, Ryan Sanderson and Jason Burns fly the Aussie flag high in Japan at the event and this year’s event will be no different,” said Wolfenden.

“I know Jason’s really keen to take out the win and he’s been training hard to lose weight. His biggest competition will probably come from Kiwi driver Matt Hamilton who finished second to Australian Matthew Wall in 2006.

“It’s been a while between drinks for the Aussie contingent – Wall was our latest winner in 2006. Hopefully Jason can change that!”