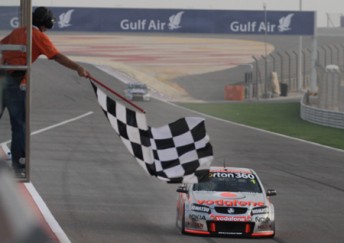 A busy early season schedule of events at the Bahrain International Circuit is being blamed for demise of the Bahraini leg of the V8 Supercars calendar.

In a statement released on Friday, V8 Supercars Australia has cited the dates of the GP2 Asia Series event (February) and Bahraini Formula One Grand Prix (March 11-13) as the reason for the decision.

“This has been a very big decision for the BIC and could only been achieved thanks to our long-standing partnership with Tony Cochrane and his team at the V8 Supercars Championship Series,” said Shaikh Salman bin Isa Al Khalifa, CEO of the Bahrain International Circuit (BIC).

“After four world-class events together, all of us at the BIC are grateful for their understanding of the logistical challenges that faced Bahrain in trying to organise two major international race meetings in the timeframe available.

“The Desert 400 has built innumerable links between the Middle East and the competitors, fans and organisers of the V8 Supercars – we have many friends in the Australian V8 series and we will continue to track the Championship with interest and maintain our great relationship in the future.”

V8 Supercars Australia CEO Martin Whitaker, who joined the Gold Coast-based organisation after serving as CEO of the BIC, said that he understood the challenges that Bahrain faced in hosting GP2, V8 Supercars and Formula One all within a month.

“Bahrain was the pioneer of V8 Supercars racing in the Middle East,” said Whitaker. V8 Supercars will not race in Bahrain in 2011

“The success of the race was the catalyst for developing the double-header with Abu Dhabi but we fully understand the challenges that Bahrain is now facing with the proximity of the Desert 400 to the opening round of the FIA Formula 1 World Championship.

“There will always be a really strong affinity and friendship between the Kingdom of Bahrain, Bahrain International Circuit and V8 Supercars and we wish them luck in the future as the circuit continues to lead the development of motorsport and corporate hospitality in the region.”

Bahrain was the first country to host a V8 Supercars event in the Middle East, following New Zealand and China in the international expansion plans of the series.

Since 2006 the circuit in Sakhir, outside the Bahraini capital of Manama, has hosted V8 Supercars action, originally in November before reverting to a February date to be paired with Abu Dhabi last season – a switch that saw it miss out on a race in the 2009 series.

In 2010 the V8 Supercar event was paired with the penultimate round of the GP2 Asia Series, with infrastructure already on the ground for the F1 Grand Prix used for the television coverage of the V8 event.

Ford Performance Racing won the first two Bahrain events in 2006 and 2007 with Jason Bright and Mark Winterbottom respectively, before Jamie Whincup took the honours for TeamVodafone in 2008 and 2010.