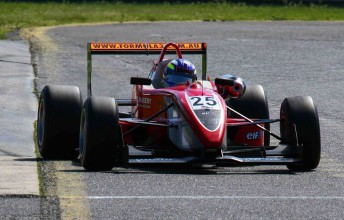 Tim Macrow’s victory in both Australian Formula 3 races at Sandown last weekend has whet his appetite for more motor racing.

The 2007 Formula 3 champion has sat on the sidelines this year but he came back to F3 competition for his local round at Sandown, winning all of the races.

Before Sandown, Macrow thought his career was over, but now, he is keen to get back into the battle, nominating the rejuvenated Carrera Cup as his best local option.

“Being out of the seat for four or five months was frustrating, and to be honest, I was starting to think that my time in a race car was over,” he told Speedcafe.com.au

“We did a last minute thing to drive at Sandown, and it is kind of frustrating that I won because now I want to do more of it. You forget how much fun it is!

“We thought we’d be in the top half dozen, but to go win all the races was well above expectations.

“I think it shows that I still have something to offer.

“I think Carerra Cup would be the most logical option for me on a local front. I’d also love to go and do Indy Lights in America or Formula 2 in Europe, but if I was stay in Australia, Carrera Cup is the idea platform.

“If you could race against Craig Baird and go close to him or be near him, you know you’re doing a good job. He’s the perfect benchmark.

“The good thing about Cup Car is that the price is reasonable, the package is good and the cars are even. It’s very attractive and I’d like to do it.

“My only hurdle is budget – but that’s the same as my entire career. It’s all pretty expensive, but if I can raise the money, I’ll definitely look at my options.”