Tiago Monteiro made his V8 Supercars debut with Tony D'Alberto

Of the 18 international V8 Supercars drivers, you would be hard-pressed to find a driver who didn’t say “I’d like to race these cars full-time.”

But in the case of Tiago Monteiro, racing a V8 Supercar isn’t just a consideration regarding his own driving career – he wants to find a place to raise his family.

Monteiro and his wife have two young children, and before the pair’s offspring reach schooling age, Monteiro wants to settle – and where else better than Australia?

The Portuguese driver used his slot alongside Tony D’Alberto in the #3 Centaur Racing Commodore VE to visit a number of Australia’s iconic cities and tourist destinations, including Melbourne, Sydney 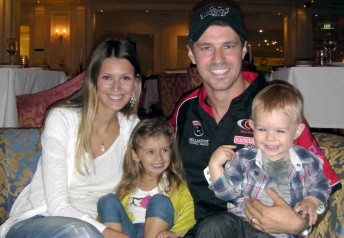 Tiago Monteiro with his young family on the Gold Coast

and Alice Springs. He told Speedcafe.com.au that he could really picture a future for himself and his family ‘down under.’

While there may not be a slot for him in the 2011 V8 grid, he is seriously looking at the class in the coming years.

“This is something that I really want to do. As far as I can see, the organisation, the people are great, very professional. I wouldn’t mind coming here, for sure,” he told Speedcafe.com.au.

“If it means I have to bring the family out here, I will do it.”

Monterio brought all members of his family out for the race week, just to make sure they liked it as much as he did.

“I brought the whole family with me. I wanted to make sure my wife could have a look at Australia too,” he said.

“I didn’t want to go back home and tell her how great it is here. She needed to see it for herself.

“I have two kids, and to make a big move like coming to Australia, it’s do-able now. If I was going to do it, it would be in the next three years.

“What I love about it is that in the one country, you have got everything. You have amazing cities, international cities with a lot of things to see, great cultures and it’s very pretty.

“And then you’ve got the desert – totally different people, culture. I love hiking and walking, so I went to Ayres Rock, Uluru, Kings Canyon – there was plenty of things for us to see.

“After the race, I went to Sydney before I have to go to the next round (of WTCC) in Japan.

“It really wouldn’t be an issue for me to move over here. It’s just a matter of finding a team that wants me.”

At this point, Monteiro’s driving future in unclear. He currently competes for World Touring Car team SEAT, which is unclear of its plans next year. All three drivers – Monteiro, Marc Gene and Gabriele Tarquini – out of contract. SEAT isn’t sure if it will continue as is, reduce its race funding or pull out all together.

“I’m not sure how next year is going to work out for me yet,” he said.

“It will all be decided soon.

“In the meantime, I’d like to do the endurance races next year. That is something that I would definitely look forward to doing, depending what I’m doing next year.”

Monteiro didn’t make the best of starts to his V8 career. In Saturday’s race at the Gold Coast, he crushed the front of the Centaur car against the tyre bundles on a number of occasions. Sunday’s race was better, making a great start before handing over to D’Alberto who was set to finish eighth until a mistake on the second last lap saw him hit the wall and collected by Lee Holdsworth’s Fujitsu Racing car.