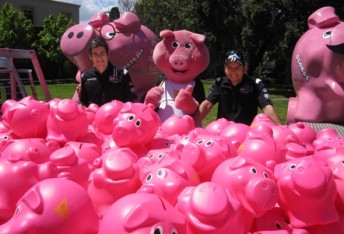 Finding sponsorships for racing cars has never been more difficult. Finding a race team to support a charity is a lot easier …

In Melbourne today, Kelly Racing was present for the announcement of the funds that the Very Special Kids charity raised during its Piggy Bank Appeal.

Along with Seven Network Melbourne newsreader Peter Mitchell, the drivers revealed that $1,090,600 has been raised, including a donation from proceeds generated at Kelly Racing’s Open Day that it held before leaving for the Bathurst 1000.

Todd Kelly, Rick Kelly and Jason Bargwanna were part of the celebrations – driving a Kelly Racing Holden ute full of the pink piggy banks to the event. 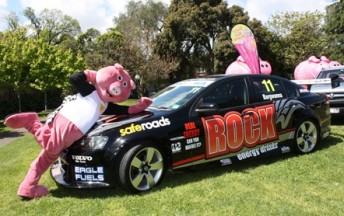 The Rock Racing Commodore at the charity event

“It was great to be a part of today’s unveil and to help our friends at Very Special Kids crack the $1million mark,” said Rick Kelly.

“Everyone involved with Very Special Kids deserves a massive pat on the back because to raise such a massive amount for such a great cause really is a huge achievement.

“It’s nice that the staff and supporters of Kelly Racing could also contribute in our own small way with the proceeds from our 2010 Open Day.”

For parents Todd Kelly and Bargwanna, they are particularly proud to have helped the organisation raise the funds.

“Bargs and I are both very lucky to have healthy kids to go home to each night after work, so it’s a really big thing for us to help a charity like this,” said Todd.

“Very Special Kids does outstanding work in our community and to raise over $1million with this latest campaign is absolutely outstanding.”

VSK’s giant piggy banks, Penelope, Percy, Princess, Patrick and George, travelled a total of 9,000 kilometers over 25 days throughout Melbourne and regional Victoria in search of donations from generous Victorians, including visiting Kelly Racing’s Braeside facility for the team’s Open Day on October 3.