Courtney puts penalty aside to focus on Tassie

Courtney puts penalty aside to focus on Tassie 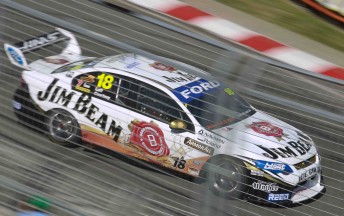 James Courtney at the Armor All Gold Coast 600

James Courtney is putting a mixed Gold Coast 600 behind him to focus his energies on Symmons Plains – a track that has been less than kind to him in the past.

The V8 Supercars Championship Series leader had his title lead reduced to 71 points on the Surfers Paradise streets last weekend after a certain victory was taken away from him on Saturday when he was penalised for a Safety Car restart breach. He and co-driver Warren Luff eventually took 10th place.

On Sunday, he finished fourth, while his closest title rival Jamie Whincup won the race.

“The points gap should have gone up on the weekend, but instead of building on my lead it was reduced a bit,” Courtney told Tasmanian newspaper The Mercury.

“With the ruling in the first race we lost our points there, and when Jamie Whincup touched me in the race on Sunday it damaged the back of my car.

“So it cost us at the end of that race. But the car is running really well and the whole team is looking forward to Symmons.”

The Falken Tasmanian Challenge, to be held at the Symmons Plains circuit on November 12-14, has not been a happy hunting ground for the Jim Beam Racing driver.

Last year, Courtney was involved in a fracas with Kelly Racing’s Dale Wood, plus another incident that saw him leave the track with little more than a damaged car.

“It’s actually been not real flash for me in the past,” he said.

“Last year, I got taken out lapping a car while I was in a podium position in Race 2, and in Race 1 I got my tyre cut at the start of the race.

“So we didn’t have a good run there last year but a lot of the tracks where we weren’t good last year we’ve been really good this year.”

One positive for Courtney is that Dunlop’s Sprint tyre returns in Tasmania. Each car will be allocated two sets of Sprints, one set for Saturday and Sunday respectively.

Courtney has been the dominant force on the tyre this year, winning all four full soft tyre rounds at Queensland Raceway and Winton earlier this year.

While Symmons is not a full Sprint tyre round, Courtney does head there with confidence, knowing he’ll have some sticky rubber to play with.

“We’ve obviously got a good set up for that tyre,” he said.

“We need to come away from every round with a solid result. It’s that time of year, if you have a bad weekend there’s no time to recover, so we’re getting closer to the end of the season we’re wanting to get as many points as we can.”