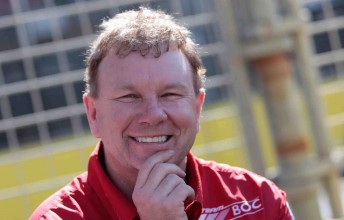 Brad Jones has been elected to the board of V8 Supercars Australia at a team owners meeting on the Gold Coast yesterday.

Jones, a former driver and co-owner of Brad Jones Racing with brother Kim, was elected to the seat previously held by Paul Morris and will serve a two-year term.

TeamVodafone principal Roland Dane was re-elected to the board, while the positions of Ross Stone of Stone Brothers Racing and Tim Edwards of Ford Performance Racing will come up for election next year.

Morris and Kelly Racing co-owner Todd Kelly have been elected to the positions of alternate board members, able to replace an absent board member and attending every second meeting.

Dane told Speedcafe.com.au that he was pleased with the new board, especially the addition of 31-year-old Kelly, who also drives the #7 Jack Daniel’s Commodore.

“I’m happy with the make up of the board,” Dane told Speedcafe.com.au

“I see no problems with it. I think its great that Todd Kelly has come onboard. It will allow him to see how the business works from this end.”