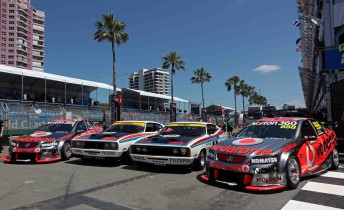 Roland Dane’s dominant V8 Supercars outfit TeamVodafone took victory in Sunday’s second leg of the Armor All Gold Coast 600, but for him, that wasn’t the best scene of the weekend.

Dane says that the sight of his two Holden Commodore VEs – the cars that recently took the one-two finish at the Bathurst 1000 – sitting alongside the two Ford XCs that also took a Bathurst quinella 33 years ago, was the best thing he saw all weekend.

“It’s all about the imagery, and what we had at the Gold Coast was fantastic. It was the highlight for me,” Dane told Speedcafe.com.au.

As part of the Pirtek Australian Legends at the Gold Coast 600, the famous Ford one-two of 1977 was recreated, but this time, the #2 car of Colin Bond was the vehicle that crossed the line first. 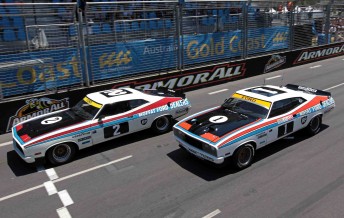 Bond leads Moffat across the line at the Gold Coast

Moffat says that the ‘scores are even’ now …

“This is a fantastic event to be a part of. It was terrific to recreate probably the most memorable moment in my motor racing career,” he said.

“It was great to spend time with the drivers from my era.

“The Bathurst Regional City Council and the National Motor Racing Museum must be congratulated for giving up the car for this weekend.

“The last time we went around it was 1-2, this time around it was 2-1, so I guess the score is even between Colin and myself. Who knows … we might have to get together for the decider.”

The Moffat/Bond two-one was a highlight of the Pirtek Australian Legends category, which featured some of the most celebrated names in motor sport driving prized cars in fast-paced demonstration races on all three days of the Armor All Gold Coast 600.

A total of nine of the 14 cars that took to the track were provided by David Bowden from Buderim on the Sunshine Coast, who has one of the most unique car collections in the world.

See below for Network Seven’s coverage of the Pirtek Australian Legends with commentary from Mark Larkham and Aaron Noonan.