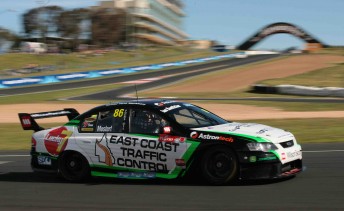 Wayne Miles is continuing with his plans for East Coast Traffic Control Racing to become a four car Fujitsu Series team next season.

The former speedway racer competed in the Fujitsu Series himself earlier this year, before giving Formula Ford Champion-elect Chaz Mostert his V8 Supercar debut at Bathurst.

Speedcafe.com.au believes Miles is also planning to run two ex-Paul Morris Motorsport Commodore VEs in 2011, with former Australian Formula 3 Champion Ben Clucas possibly at the wheel of one of them.

“There are a number of people who have potential for us to work with over the next four or five years,” Miles told Speedcafe.com.au.

“We want to give them some good grounding, because we do want to move into the main game in two or three years.”

“We have four cars available. We’ve purchased two, and there’re two other cars that are available for next year if the right driver comes along with a reasonable budget.

“We’d have one team for Ford and one team for Holden. They’d run separately, obviously with parts, but logistically, they’d be together.”

Miles is a clear believer in Mostert’s talents, with the youngster finishing fourth on debut for the team at Bathurst earlier this month.

“We hope that Chaz is our man to step up,” said Miles.

“His grounding and base is fantastic. Justin Cotter has brought him along brilliantly, and we’ll continue to work with him to ensure there is an avenue to keep going. If their budgets aren’t big, then we can give them a head start.”

Clucas’s plans hinge on striking a deal with James Rosenberg, whose VE is currently sitting at PMM after being raced by Jack Perkins in the Fujitsu Series earlier in the year.

“We’ve put a proposal to him, and we’ll wait and see if his financial backers can come up with the money,” he said.

“The team have given him a fairly, in my opinion, attractive deal, and I may help him out a bit, we’ll see how it goes.”

Having brought Clucas over to race in Formula 3 in 2006, Rosenberg says that the Briton is something special.

“He is by far the best driver I’ve ever had in one of my cars, and that includes (James) Winslow, (Joey) Foster… everyone,” he said.

“2006 wasn’t the strongest year of Formula 3, but he won just about every race he entered. He’s very dedicated, and very fast.”