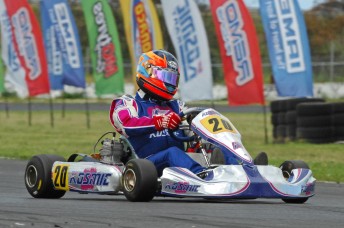 Remo Luciani on his way to victory at the Formula 100 Nationals in Geelong. Pic: photowagon.com.au

Remo Luciani recreated Australian karting history on the weekend at the Formula 100 Nationals in Geelong and in the process became the sport’s oldest ever national champion.

Luciani entered the event in an attempt to replicate his first national championship victory at the Geelong venue in 1990 – and he did.

“My first national championship win came at Geelong in 1990 in the International category (equivalent to the Formula 100 class) so I set myself a goal of trying to win this weekend,” said Luciani.

“The first time I drove the kart fitted with a Formula 100 specification engine a few weeks ago I got out of the kart asking myself – what the hell I was doing this for at the age of 50.

“After the first day I was extremely sore, the second day not so bad and then this weekend I was probably half way back to the fitness I used to have when I won my last title at this level in 1995.”

The Horsham (Victoria) driver remained unbeaten in his return to the high-powered Formula 100 category on his way to the seventh national title of his illustrious career.

Behind Luciani in the Formula 100 Heavy category came local Geelong driver Dominic Albanese who put in a strong performance to claim the runner-up spot ahead of Matthew Mills and Zane Wyatt. Albanese went one better in the 200cc Super support category.

Fifty year-old Luciani had several words of advice for his younger competitors.

“This win didn’t just happen, I made it happen. I’ve always said that you only get out of things what you get put into them,” said Luciani.

“While everyone else was at home watching Bathurst, Formula One and the Moto GP over the past few weeks I’ve been here doing laps all day long to get myself ready for this weekend.”

Adam Hughes added another national karting crown to his ever-growing resume with victory in the Formula 100 Light category.

Hughes took the win ahead of Sarron Caddy and Mark Domaschenz, however, the 22 year-old didn’t have it all his own way throughout the weekend.

During qualifying, heat races and pre-final Hughes battled with fellow Victorian Dean Foster but when Foster encountered engine dramas early in the final it allowed the Kosmic pilot to clear away from the field and take a comfortable victory.

The weekend’s victory makes it two wins in three years at the event for Hughes who will next year step into the CIK Stars of Karting Series on a full-time basis.

Run in conjunction with the Formula 100 Nationals was the IAME Leopard Challenge final. Reigning national champion Dean Foster won the Light category while Mitchener proved superior in the Heavy category.

A large contingent of drivers also lined up in the Gearbox (KZ2) category, including Italian star Roberto Toninelli, where David Sera took the win ahead of CIK Stars of Karting Series Champion Matthew Wall and Lee Mitchener.