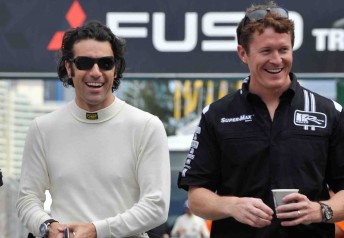 The international component of the Gold Coast street race has been deemed a success, and big changes are planned for 2011.

The V8 Supercars Australia board will consider pairing all 29 cars with international stars, rather than just 18 that competed this year.

The renewed event will keep its traditional date (two weeks after Bathurst) and with no date clash with Formula One next year, a list of exceptional driving talent is expected to descend on the streets of Surfers Paradise.

Drivers like David Coulthard, a veteran F1 driver with 13 Grand Prix career wins, now works for the BBC as an expert commentator. With no commitments, Coulthard could be free to compete in Australia. Speedcafe.com.au understands that he has already been approached about it. V8 Supercars Executive Chairman Tony Cochrane told Speedcafe.com.au that luring 29 drivers to the event is something the category will pursue.

“That is one of the things that we’ll look at,” he said.

“We had to start off slowly. A lot of people in the motorsport press critisised it, saying it would not work.

“All of the sudden we’ve gone from something where people say it doesn’t work to 170,000 people voting with their feet. It’s a good result.”

Cochrane mentioned former F1 winners Coulthard and Alesi as two men he’d like to see compete in V8 Supercars, and told The Gold Coast Bulletin that Michael Schumacher will be approached once he retires from Formula One.

“It’s good next year that we won’t clash with Formula One,” he said.

“There are a lot of ex-F1 stars who are tied up in F1 like Jean Alesi, David Coulthard who will become available and conveniently be in this part of the world.

“It’s going to be a pretty interesting go-around next time. There’s so many guys who want to drive in it. All of these guys who can want to come back.”

Cochrane was not concerned with the level of damage caused by the rookie internationals over the weekend.

“It’s motor racing. It’s part of the reason why it sells tickets,” he said.

“You’re going to have that and that could have happened anywhere. This is a tricky, difficult circuit.

“We’re going to access everything we’ve done in the next couple of weeks, make some changes and look to move it forward.”

Brit Andy Priaulx, driving with Craig Lowndes in the #888 TeamVodafone Commodore VE, completed the event as the top international driver, finishing with second and 10th place from the two races.