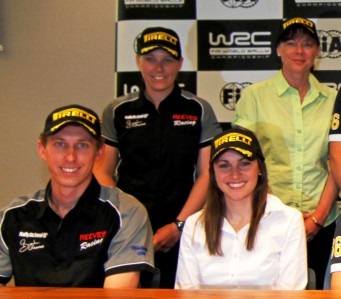 Australia has two drivers guaranteed in next year’s World Rally Championship after young guns Brendan Reeves and Molly Taylor were selected to be part of the newly-created WRC Academy.

Pitted against 10 other drivers, the winning six will become part of the FIA’s young driver programme. 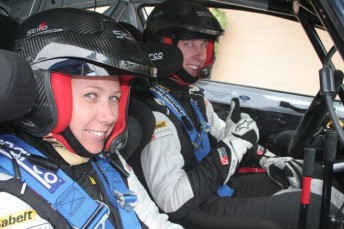 Reeves and Smyth during the driving test

Next year’s young driver programme will run within the all-new WRC Academy. The six drivers will contest six rounds of the 2011 FIA World Rally Championship in Ford Fiesta R2s.

On Friday, prior to the driving element of the Shoot-Out, the 16 drivers – and their co-drivers – took part in a day-long training session with ESP, the company which has run the Pirelli Star Driver training for the last two years. After two lectures from ESP co-founder and 2001 FIA World Rally Champion co-driver Robert Reid, the 16 crews were split into four groups and undertook a team-building exercise which illustrated various aspects of the World Rally Championship and the sport in general. 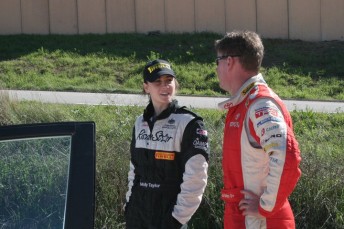 Neal Bates was on-hand to help the Aussie youngsters

Prepared for the day of competition, the drivers enjoyed the Spanish sunshine on Saturday as they lined up for their drives. Piloting Ford Fiesta R2s, the drivers tackled two runs at a gravel stage and two runs at an asphalt test, with Pirelli Scorpion tyres used for both surfaces.

After evaluating the driving skills of the 16 hopefuls, the potential Pirelli Star Drivers then made a presentation to the jury on the final morning, outlining their careers to date and aspirations for the future. They then answered questions from the judging panel – which included former world rally winner Michèle Mouton – before the jury selected the drivers they felt most deserving of one of the six available spaces on next year’s young driver initiative.

22-year-old Reeves and his co-driving sister Rhianon Smyth an outstanding year with victory in the Pacific Cup and the FIA Asia-Pacific Rally Championship round in New Caledonia.

“It was pretty amazing, right from the start with the training with World Championship winning co-driver Robert Reid,” said Reeves.

“Then we came to the driving and we took that really seriously. The media interview went well this morning.”

“I feel overwhelmed just to be sitting here,” said Taylor.

“My focus has always been working towards the WRC, so to be sitting here today knowing that this is actually a reality is surreal. This is just the beginning and the hard work starts now – I’m buzzing!”

Taylor had plenty of experience in the co-driver’s seat with her mother, four-time Australian Rally Champion Coral Taylor. Also on-hand to assist was Neal Bates who provided valuable input for both of Australia’s representatives.

Pirelli Motorsport Manager Mario Isola was delighted with the selection of the drivers.

“It’s really exciting to see the next year of Pirelli Star Drivers coming through,” said Isola.

“Having drivers coming from across the world for the Shoot-Out has made this a very interesting event for us. Pirelli is proud to have backed the FIA’s young driver development initiative and we are delighted to see this continue into next season, maintaining Pirelli’s presence in the FIA World Rally Championship and furthering our rich history at the pinnacle of world rallying.”