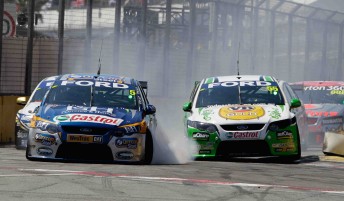 Mark Winterbottom says that his chances of winning this year’s V8 Supercars Championship Series are gone after being eliminated in the opening lap of the Armor All Gold Coast 600.

The #5 Orrcon Steel Ford Performance Racing driver watched from pit lane at the start of yesterday’s race while his team-mate Luke Youlden launched his car between The Bottle-O Racing entry of Jacques Villeneuve and the concrete wall.

While Winterbottom is mathematically well in the title running, he is now 328 points adrift from leader James Courtney and says his hopes have totally faded.

“The championship is over – you can’t get that back now,” he told Speedcafe.com.au.

“It has been two rounds in-a-row where the car has been in the wall, and that’s 450 points we’re missing. I don’t think we can do much from here.

“It’s race wins from now on and build for next year. You can’t put the car in the fence and win championships. We need to improve on that.”

All in all, it was a shocking race for the factory Ford team.

All three of the team’s cars qualified inside the top seven, but by the time the field made it through the new turn four hairpin, all three were out of contention.

On the approach to turn one, Youlden, driving with Winterbottom, was squeezed between Villeneuve and the wall, damaging the front left upright. At the hairpin, Villeneuve was turned around by Greg Ritter (#33 Fujitsu Racing) before Will Power (#6 FPR) collected the stranded Villeneuve.

“The race was an absolute shocker for the team,” Winterbottom said.

“It should have been a good day. My car was fantastic. In the shootout, we got the tyre pressures wrong – otherwise we should have been on pole and driven away with it because the car is strong.

“We didn’t even get to turn one before hitting our sister car, which then hit its sister car a few turns later.