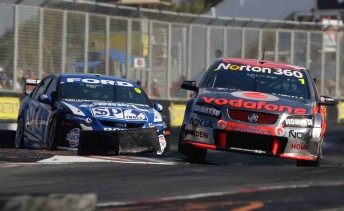 Jamie Whincup has withstood a heated and wild attack to take a hard fought victory in the final race of the Armor All Gold Coast 600.

The TeamVodafone star held off the advances of SP Tools Ford of Shane van Gisbergen in a fraught last 10 laps, securing victory.

Van Gisbergen applied bulk pressure to Whincup, staying within sight of each other for the last 40 laps of the race.

In a grandstand finish, van Gisbergen got alongside the #1 Vodafone car on front straight, starting the last lap. The pair clashed at the chicane, both survived, and so did Whincup’s lead.

In the opening round of pit stops, the second Ford Performance Racing Falcon of Steve Richards/Will Power was delayed, leaving the Winterbottom/Luke Youlden car parked behind it.

The Winterbottom car dropped down as low as 26th before mounting a huge podium comeback.

Title leader James Courtney played a watching brief role in the end, finishing fourth ahead of Paul Dumbrell/Jacques Villeneuve – the highest-placed international driver for the race.

Priaulx was awarded the trophy for the best international driver, having collected the most points over the two races.

Centaur Racing’s Tony D’Alberto/Tiago Monteiro were running a comfortable eighth on the last lap until an incident curtailed what would have been a strong result.

Yesterday’s race winner Garth Tander was eliminated on lap 57 when he collected the wall at turn three. Team-mate Cameron McConville had run comfortably at the front of the pack during the opening stint, however, Tander’s mistake removed them from challenging for another win.

Andrew Jones (Team BOC) and Scott Dixon (Jack Daniel’s Racing) were involved in an odd front straight crash. Jones was slowing under Safety Car conditions and was hit by a blinded Dixon. The shunt ripped wheels off both cars.

Trading Post’s Alain Menu was the first casualty of the race, blowing the clutch on his Commodore at the start.

The next round of the V8 Supercars Championship Series will be held at Symmons Plain on November 12-14.