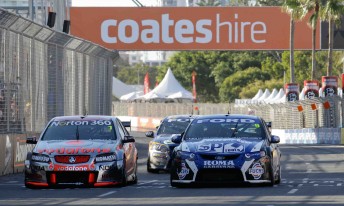 Jamie Whincup credited his stunning victory in Race 20 of the V8 Supercar Championship series on overnight setup changes to the #1 Vodafone Commodore after a dissapointing race on Saturday.

Along with co-driver Steve Owen, Whincup could manage only sixth on Satuday, before coming out on top in a classic late race duel with SP Tools Racing’s Shane van Gisbergen today.

But while the setup changes made a victory possible, Whincup admitted to having nothing left by the end.

“We were a sitting duck there at the end,” he said.

“We’d come a long way from yesterday, the car was very very slow, we were the seventh or eighth, maybe even tenth quickest time yesterday.

“We made massive changes last night, the car was dramatically better, but it still used its rear tyres up massively.

“I had a very very good fight with Shane, it was extremely hard but fair.”

“We thought we were a good chance at Phillip Island and Bathurst. He really wanted his first win, and I’m happy we got it for him today.”

The result means Whincup closes to within 71 points of championship leader James Courtney – although the two-time defending champion said he did not consider the points situation during the race.

“I was just going as hard as I can, those things don’t really cross your mind when you’re out there,” he said.

“We’ve got no real room for error until the end of the year, so fingers crossed we can have a good run at Tassie in three weeks time.”

For Owen, the victory was understandably a sweet moment.

“We probably should have won Phillip Island, and possibly could have won Bathurst if the other car wasn’t painted the same colour, so it’s fantastic to come here and finally get a result,” he said.

“The car wasn’t great yesterday, we went over it last night. The good thing is that, we managed to turn it around.

“The car still probably wasn’t the quickest out there, but it’s the ones that you win where you don’t have the best car that are probably the most satisfying.”