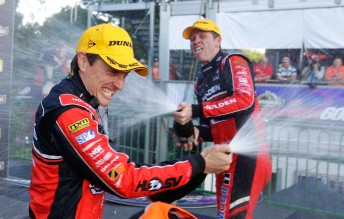 Cameron McConville has confirmed that he is not seeking a return to full-time driving in the V8 Supercar Championship Series, despite taking the second race win of his career on the Gold Coast yesterday.

The 36-year-old drove a marvelous first stint in Race 19 of the championship – putting in excess of 20 seconds on his pursuers before handing over to co-driver Garth Tander.

The pitstop itself was ten seconds longer than planned, thanks to the car being held by stewards as a penalty for rolling at the start – an infringement McConville was unsure occurred.

“I was pretty confident I’d come to a stop and pulled the brake on,” he said after the race.

“But I just had to put my head down and go, and it all worked out in the end.

“I really thought we deserved to win today.

“When we lost the lead (to Courtney on Lap 80) I was a bit dissapointed, because we had such a good car for the day I thought we both deserved to get up there.”

The former Australian Formula Ford and Australian GT Production Car Champion then confirmed that the win has not inspired him to make a play for a full-time seat at HRT next season.

“I’m quite happy in my spot, and I’m happy to come back next year and back up with this guy (Tander) in a front running car,” he said.

“I’ve got other things going on in life now, and the commitment you need in this championship is far more than I could give.

“I just hope that Tony Cochrane doesn’t bring out 29 internationals next year, because I’d like to come back here – It’s a great event.

“I’m quite happy with my bit, and if I could contribute to a Bathurst win down the track, that’s what I’ve got to focus my career on now.”